Many have been telling me today that I have gone to the darkside, I’ve tried snowboarding!

I borrowed Liam’s Short Board (157, a bit small for me) and his spare boots , MC offered to teach me to board (she had to use that CASI Level 1 for someone new at it). Anyway, all the plan’s were set last night. I then pop open the first of about 9 beers, MC opens her 2L of Cider and I promptly loose $5 at poker (I’ve learned that too).

4 shots (each) of Jager are promptly consumed to down my sorrows and MC’s sorrows, not that she had any. Then we storm off to Garf’s in our steaming state. $5.50 to get in there for locals? Not even worth that. Anyway, had a good night non the less and drank yet more. Anyway, MC and Janet are heading home and I decide to go with em (Big Mike and Liam couldn’t be found). God, MC was (and I use her words here) STEAMING on the way home.

Decided to delay the start of the morning somewhat, but at 10:20 I went and knocked on Janet’s door: found her brushing her teeth, knocked on MCLiesaCaz’s door: found Caz dead to the world and MC stumbling around still in the clothes she was wearing last night. Humm… guess we wern’t going to be up the hill by 11…

Anyway, once we had some anti-hangover sausage rolls, (MC: Can I put this bit in?) , a Powerade bottletop disintigrating and turning MC’s bag orange, we got started. Before I go on, I would like to acknowledge that I have seen people other than MC in the last day… however they weren’t the ones getting blind drunk, hungover and then teaching me snowboarding.

Long story short about the training, in 3 hours I went from knowing near nothing to linking turns, getting off the lift without falling, stopping, avoiding certain death… basically she was saying I’m Level 3 after 3 hours. Congrats MC, that’s as fast if not faster than the head of Ski School back in November. I’ll definatly need more practice, which will be hard since there’s only really 3 days of skiing left availiable and I’m borrowing kit. Still, I can say that I’ve done it now.

Spent the evening loading up MC and Caz’ iPods, watching repeats of a 2 part CSI (that’s repeats from THE SAME DAY), then came back here and went to Crystal with the new flatemates. Good times.

Also, here are some snaps of my office 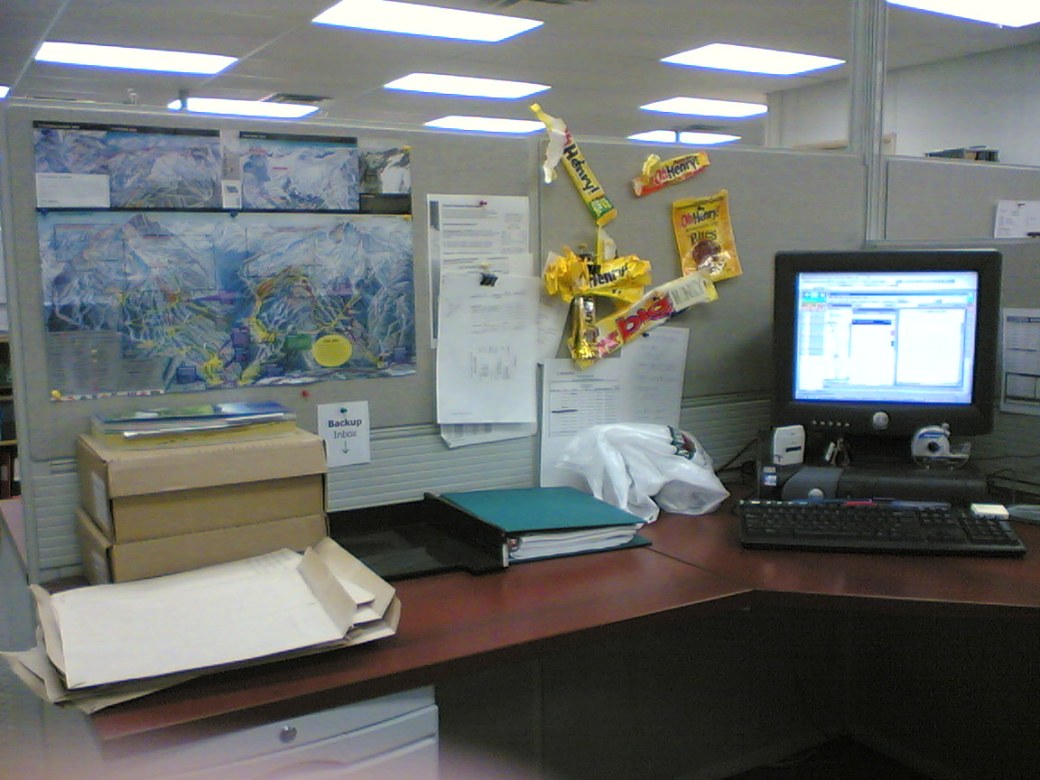 More of my desk!

I like to have a mountain map handy at all times! 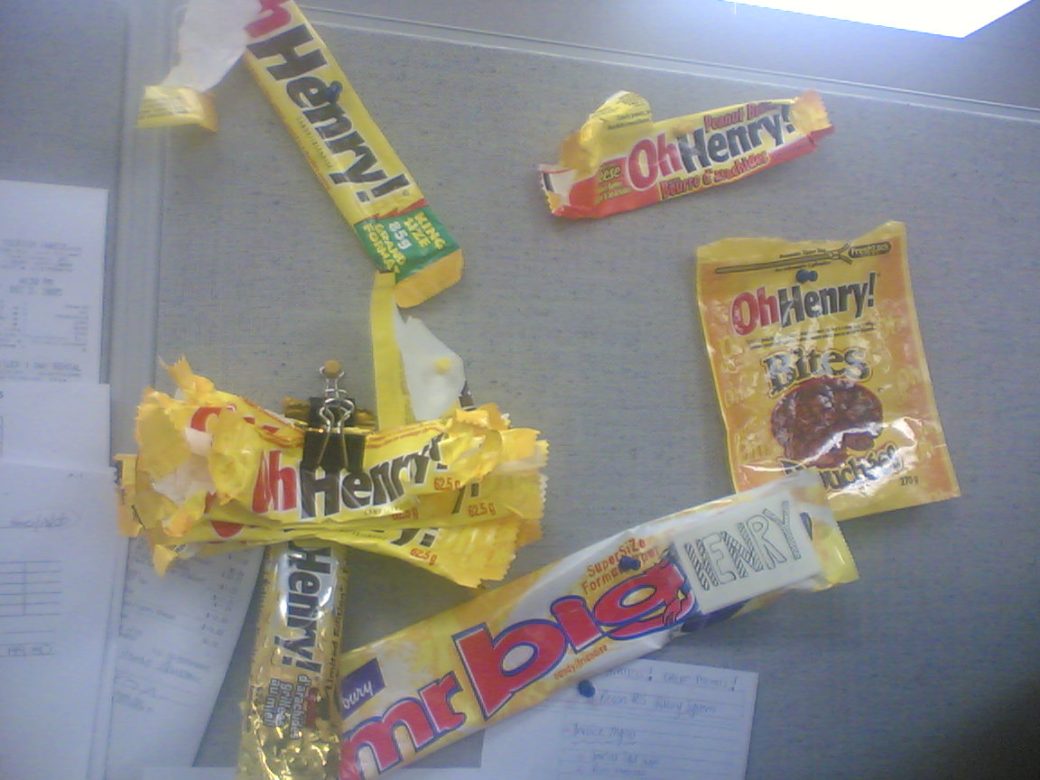 My collection of Oh! Henry wrappers! Which grew a lot! (I ate none of these, people just stuck them there) 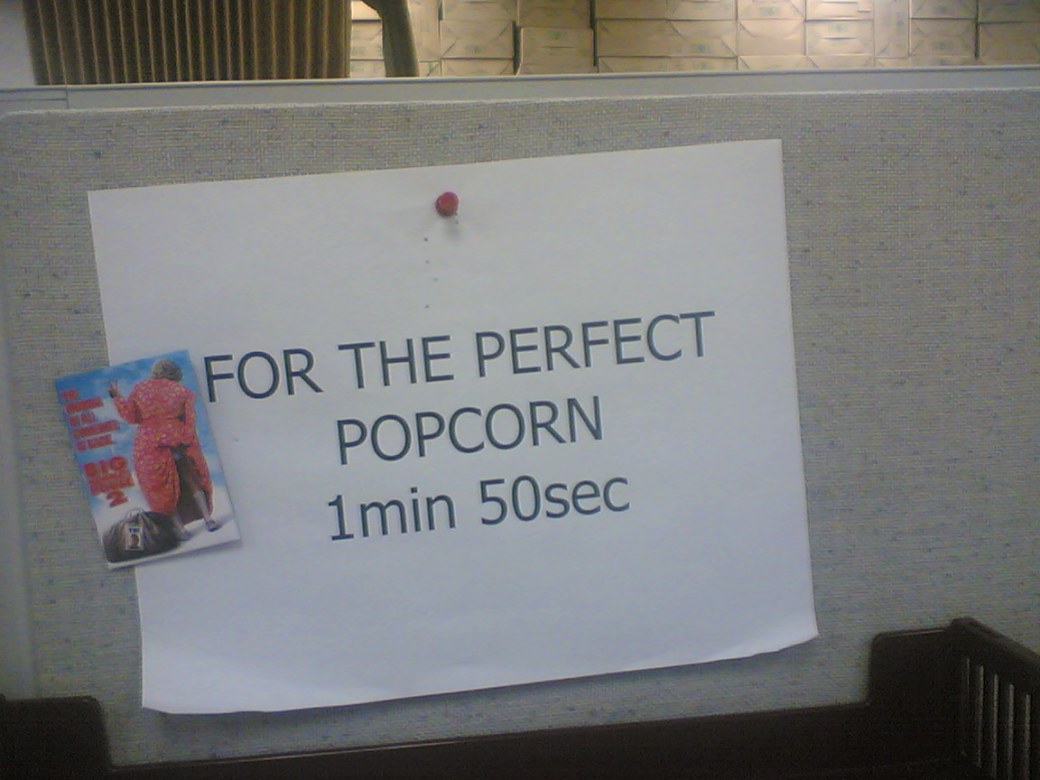 One thought on “Now a snowboarder too”