Sorry for taking so long to update folks. You know how useless I’ve become. But! I’ve got quite a bit of exciting (I hope) news.

Dad + Gill + The Lads came over to Whistler for the final few days that I was up there. We did quite a few really nice restaurants. Rented a car and drove (eventually) all the way to Lillowet (which was really boring, but the drive was bleeding spectacular!). Took em to the Peak where we all got sunburned. Took them all to Lost Lake which was a lot of fun, but it’s was still COLD AS HELL! Anyway, Dad decided to bring me back down to Vancouver on the Whistler Mountaineer train! That was great, nice food, STUNNING VIEWS. Will have to get the photos off them

After the family left, me, Mikey, Alan, Liam, Cas, MC, Claire, Claire’s Sister Gemma? and Janet all met up in Vancouver for one last insane night! And believe me it was. After a lot of double-high balls in the Royal we ended up at some Gay Club that was having a Straight night. Anyway, a lot of insane things happened and some of my close friends get to know what they are. I will say they involved ladies.

Had a hangover and no sleep on the real last day

Do you know they don’t feed you on internal Air Canada Flights! Too boot I couldn’t bring any pancakes with nice, liquid, maple syrup on board with me! Terrorists won that one.

Scrummed down my last Roast Beef Dip Sandwich in Toronto Pearson. Should have bought beer with it because when I got to the “infield satellite terminal” the bar was closed!

However, I had nice emergency exit seats and befriended an air hostess, so there were plenty of free drinks and perks on the flight 🙂

Tosca is now a lot grayer and a lot browner on her back fur! What have you been doing this last year pooch!? Billy is still full of life!

Time passes at this point… skipping forward to:

Down to Norwich to see Jason and Rob

These two have been living near simultaneous lifestyles to my own, but in Norwich. We were drinking as soon as I got out of the car!

Anyway, it was School Disco night at the Waterfront, but first we ended up in Cougartown, Chicago’s! Jason got some lass writing in lipstick on his exposed legs (since he was wearing school shorts, which were also cutting off important blood supplies). This then turns into us all writing on his leg in marker pen!

I’m there reveling in (what I consider to be) cheap drinks, slugging back tons of boose. Why I forgot to get a snakebite I will never know.

When we got to the Waterfront it was a case of playing “ram the crowd”. At one point I thought we were going to get thrown out for forming a circle and then running into the dancefloor.

Oh yeah… there are photos!

I guess we must have gone here the first night!? 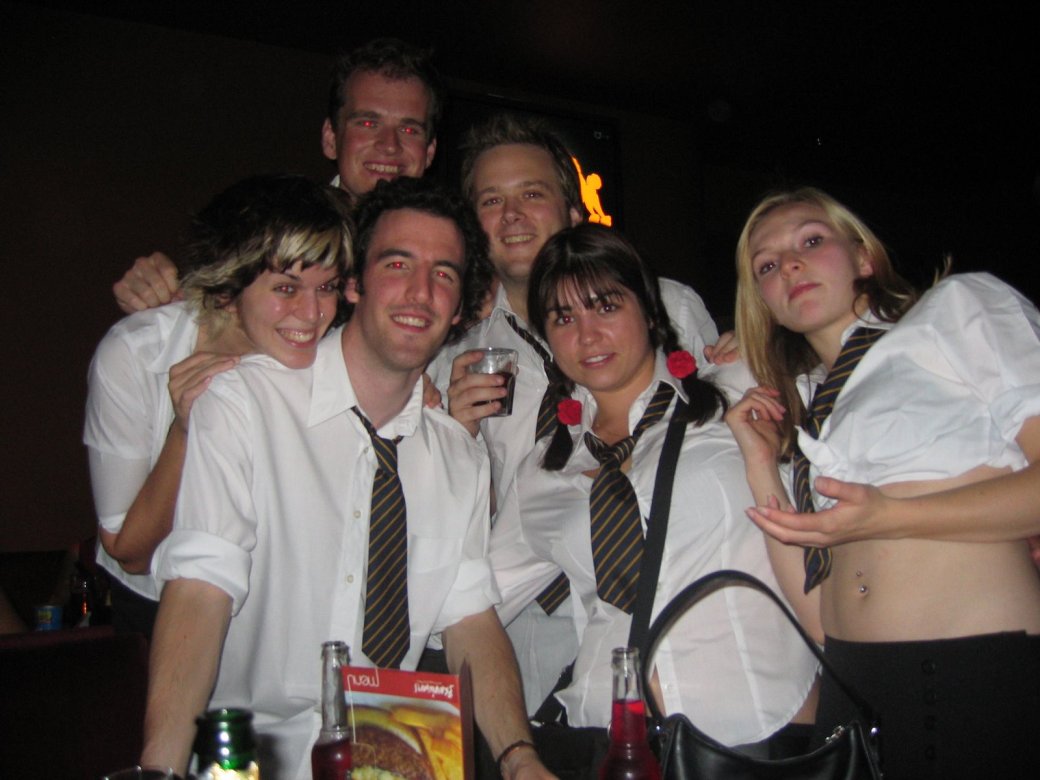 The lads are back!

I woke up to some random girl called Keri saying good morning. I had no idea who she was and I wondered how I ended up on Robs sofa in my boxers… things soon became clear, I was back in Uni mode! That’s how.

The day after was more of the same, basically in the pub all day having a great time!

David survived his trip to Mongolia and has come back with a beard! His tip: Car maintenance is great over there, $1 gets your clutch cable repaired!

Will try to post a picture of that bearded rat later.

If you lot want it (and want £30 credit on your bill and mine because you said I referred you), ask away.

Ok… I’m running out of typing energy. But…

I’ve got myself a nice IT Support Job down in Clapham, London. I’ll tell you more about it all later… keep you hanging on.

One thought on “Henry!? Where the hell have you been?”