Posting this a few days after writing it. I’m on a stupidly slow connection so there are no large versions of the photos.

Danger, this one has a lot of complaining

It’s been a while since I last updated you all hasn’t it?

Since the last post I’ve been to Dalat and then on to Ho Chi Minh City (or Saigon if you prefer, as most Vietnamese do).

Let’s start with Dalat itself. On the night I arrived checked into the Peace Hotel and then I found HNL restaurant and had the best Rice Hotpot I have ever had. Unbelievably great.

This was from the first day, and yes the weather was as ominous as it looked. The first task was to go scope out down town and see what I could do about onward travel… but I got distracted in the market and forgot about it.

Dalat is actually a big town for adventure sports etc, such as rock climbing, mountain biking etc. I was up for a trek the next day, but before I booked it on a whim the rain drove me thoroughly back to the hotel. It was coming down crazy, so most of the afternoon was spent web developing and chatting to a few travellers.

That evening I had dinner in the hotel (where the Easy Rider guys will not leave you alone until you start eating) and then went bar hoping, eventually ending up in Saigon Nights playing Connect4 with a Canadian. I was holding my own at it, until the bartender came along and challenged me… he must have been some sort of world champion! How good can you get at it!?

The next day I decided to head on to Ho Chi Minh City (HCMC) that afternoon, but I wanted to do the cable car first. Got a xe om up there and the views were rather good…

And at the end, I went for a bit of a walk to the reservoir up there. 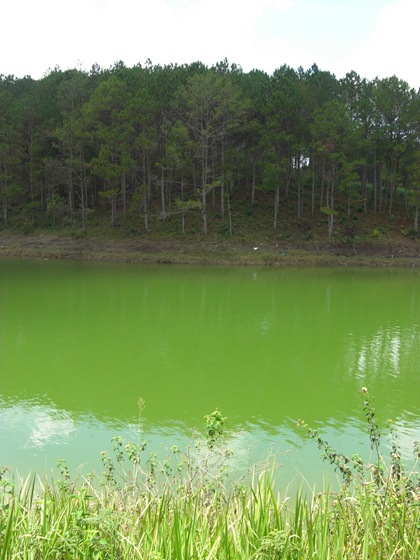 Not sure why the water was so green in that bit.

Anyway, I got the cable car back before it closed and then realised that I had a problem. You see I had gotten a mototaxi up but I couldn’t find one to get down again. Eventually I just had to set off on foot, hoping to intercept one on the way.

I eventually did, although the guy spoke no English. After much pointing etc, we agreed on going back to the hotel for 10000VND. However, we stopped at his house to get a helmet. Instead of doing the traditional thing and putting the stand down, he just leapt off the bike and I had to snap my legs down to stop it falling… one of them ending up on the hot exhaust. I now have a 3cm burn on my leg for my troubles.

The guy was another nutter driver. We were doing 120kph in places! Even had the GPS out to look at the speed, which he was fascinated with.

Anyway, hours of that and I felt sick. And worse still it dropped me off at the wrong bus stop in HCMC and I was miles from the backpacker district. Talked a 100000VND mototaxi to 40000VND… worth every penny! Was miles and a great intro to the city. Saw loads of sights that I remembered for tomorrow. Decided I wasn’t going to go straight to Cambodia, I would stay here for a day.

Found a hotel that would let me take their last room for $14, and it was a place as usual. Hint: Guest houses are as good as hotels. I then stumbled across Go2, which did BBQ at your table! Goat took my fancy, along with several bevvies.

Yes, the traffic here is proper chaos! Much worse than Hanoi or anywhere else for that matter.

I got a feel for the place then headed to the Central Market.

Nice, but it smelled of raw meat!

I then headed to the Reunification Palace. 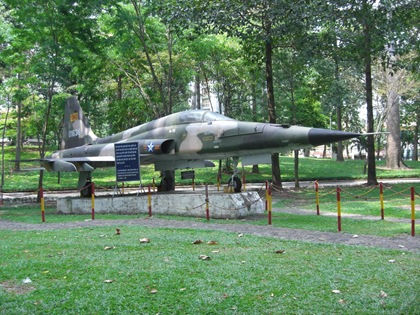 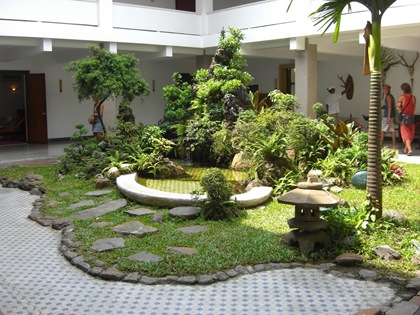 And on the roof…

What house is complete without one?

I turned for the hotel again when I heard thunder… I knew this could mean only one thing in HCMC. Flying past guys selling coconuts, cigs, generally being annoying, I had one thing I wanted to avoid above all else. As it got closer, I picked up the pace, but it was too late.

The poncho only saved my backpack, my tshirt, shorts and boots (DAMNIT, the boots!) were soaked. The boots particularly had gotten it bad! Pouring water out of them etc. Immediately got into my new hotel room (oh, had to move) and set the AC on drying mode. It was no good, the next day they were still soaked.

I was trying to sort out bus travel to Phnom Penh, Cambodia for the next day, but it was Cambodian new year, so I decided to stay one more day in HCMC.

Mostly stayed in that evening, but did pop out for all you can eat pizza and chicken satay!

The next day was quieter. I did some sight seeing but mainly headed out to find some new headphones (genuine ones are hard to find), finally sort the bus and just found what I found really. It might sound not like a full day but it was actually quite a lot of fun. Downside though was going to HSBC to see if I could get some US Dollars, and being told that they wouldn’t hand them over. Thanks “the world’s local bank”.

That evening I went back to Go2 and had goat again, then tried a few local bar. Nice

And today I was up at 6:30 to get the 8am bus, we’ve just been through the Cambodian border and I have a nice new full page visa in the passport. Only cost $25, $5 more than the actual visa fee as the bus company sorted it all for me. Completely fine with that as I was concerned it would be as high as $40 due to a bent border guard.