So after the fun of Sihanoukville it was time to head into Thailand. The bus took me to the border and then I let the guy on there talk me into upgrading my ticket to go to Trat for an extra $6. Bags were unloaded for us, we just had to sort the formalities on the Cambodian side (hand in our departure card and get our exit stamp) and then walk across no man’s land to Thailand. There are large signs saying “drug smuggling will get you the death penalty” which almost made me want to check my bag even though I knew nothing was in there.

Once at the Thai side the guy seemed a bit suprised I had bothered to organise a visa in Osaka, but asked no questions really and just gave me a 60 day stamp. Easy!

I then get across and find my bag. The guy who hauled it across the border said “you have to give me some money for taking it across” as quietly as he could. I told him to speak up (knowning exactly what he was up to)… he wouldn’t. I then told him that he got paid by the bus company and if he wanted money he should have asked before he did it. As I walked off he went “Why not?” (a guilt tripping tactic), he got a full mouthful why not. Thing was, I would have tipped him if he had not been working the scam.

Anyway, we waited for the bus, and waited, and waited. Eventually mini busses start turning up and taking people to various bus stations for onward travel. I was in the last mini bus, some people before me had gone in the back of a pickup truck.

When I got to Trat I decided to head straight on to Ko Chang rather than stay. My pickup truck to the ferry cost only 50 THB, some of the guy’s who had bought through tickets from the bus company had to pay it anyway… one, who I later got talking to, was not happy at all.

Still, it’s one of those adventureous looking vehicles… 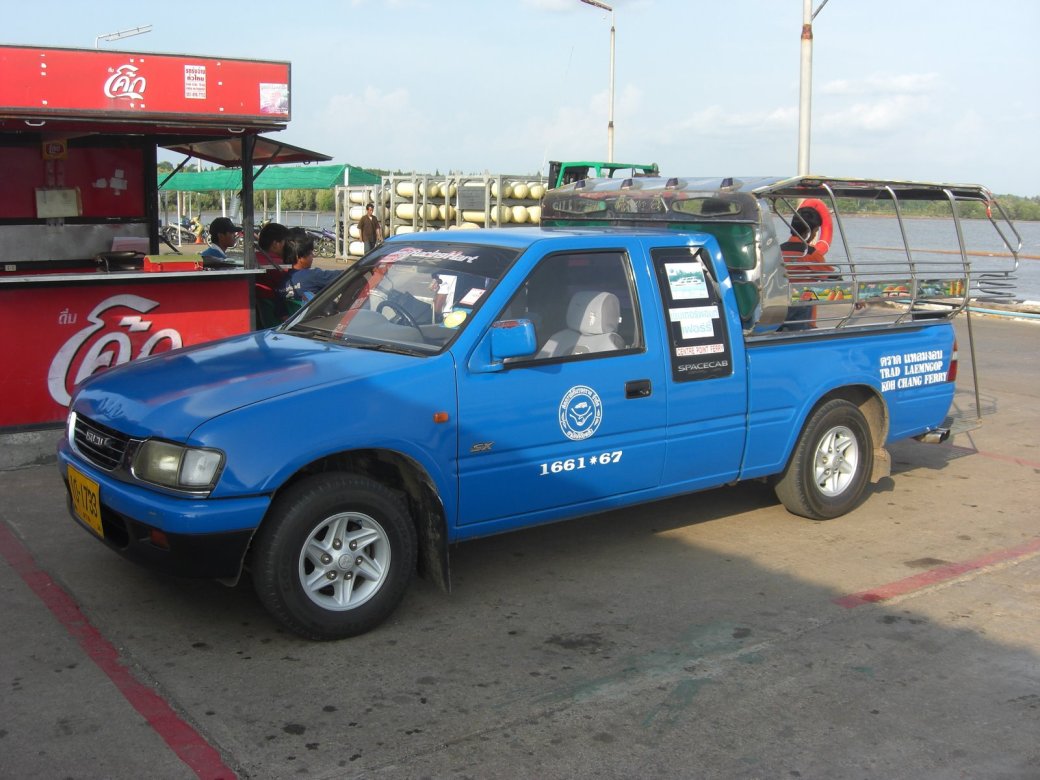 Now guess what I was thinking as I approached this scene… 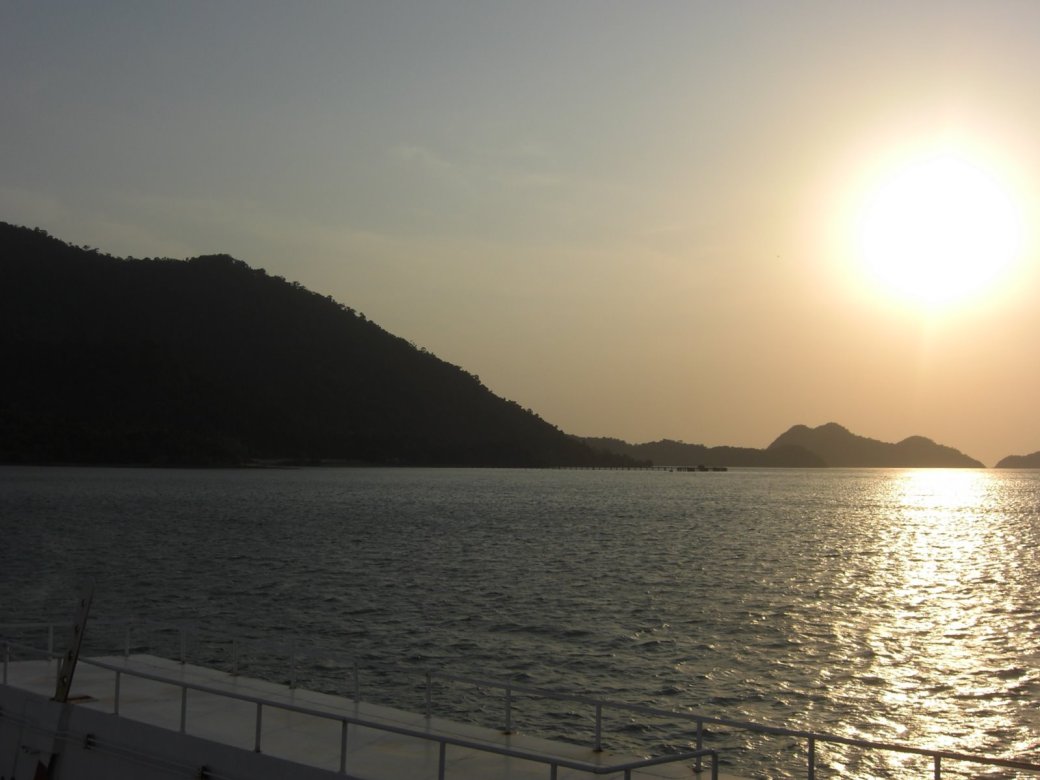 It's getting dark. That's when all the really big ones come out! Get me Sam Neil and Jeff Goldblum! Only they can save us now!

We took another pickup truck to Lonely Beach, where all the backpackers hang out. By the way, we is myself, David who was the guy who I got talking to on the bus, and Sum, a Khymer woman who had been helping David. We found some cheap bunaglows for a mere 250 THB and they had fetching pink walls and Hello Kitt (sic) sheets!

We then went off and I had some of the best Thai Red Curry I have ever eaten! Damn it’s good.

The next day we toured the island a bit… I’ll let the photos do this part for me. 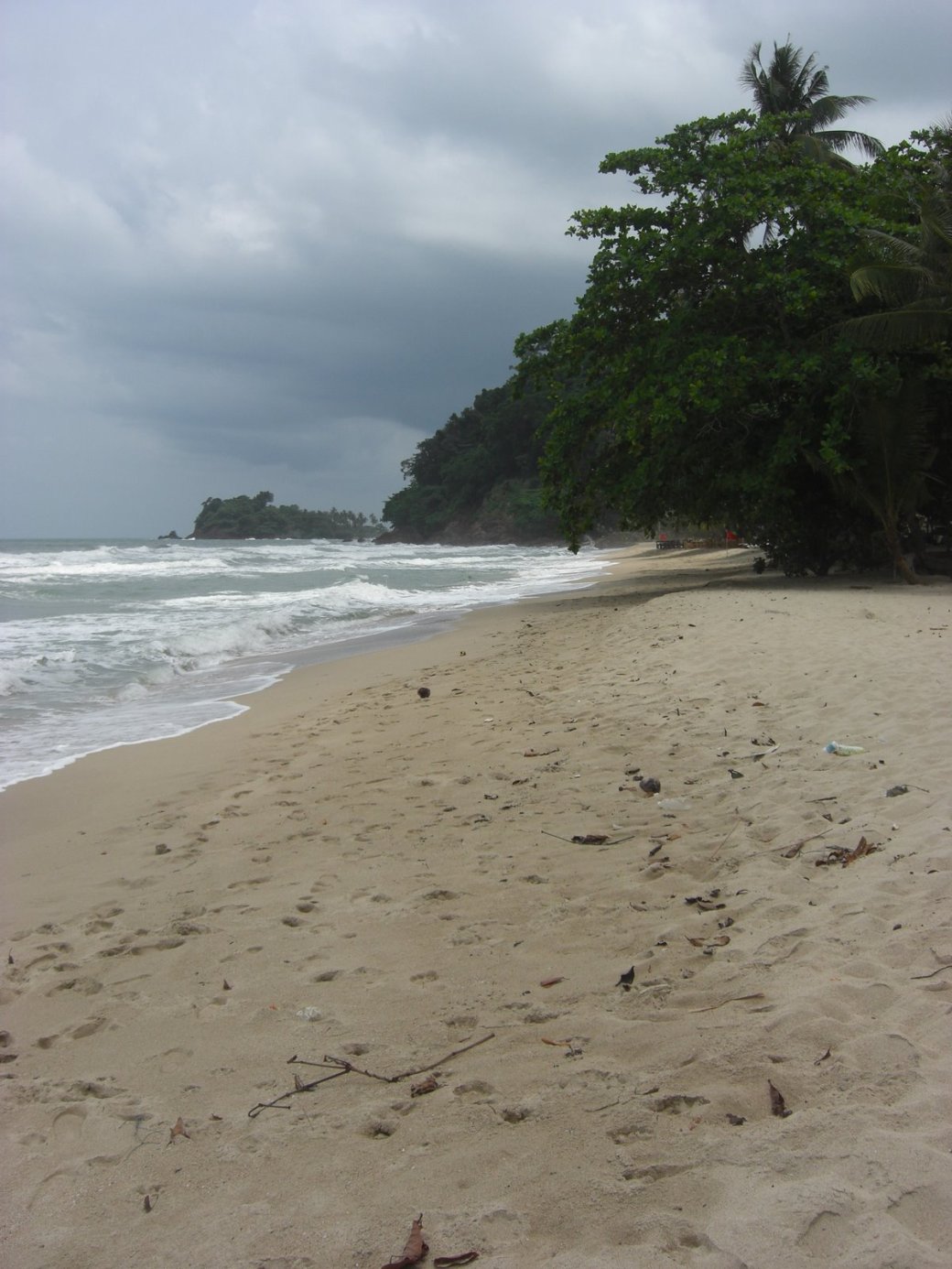 The morning was a bit cloudy. This is Lonely Beach.

Dunno what was going on with this bamboo pole 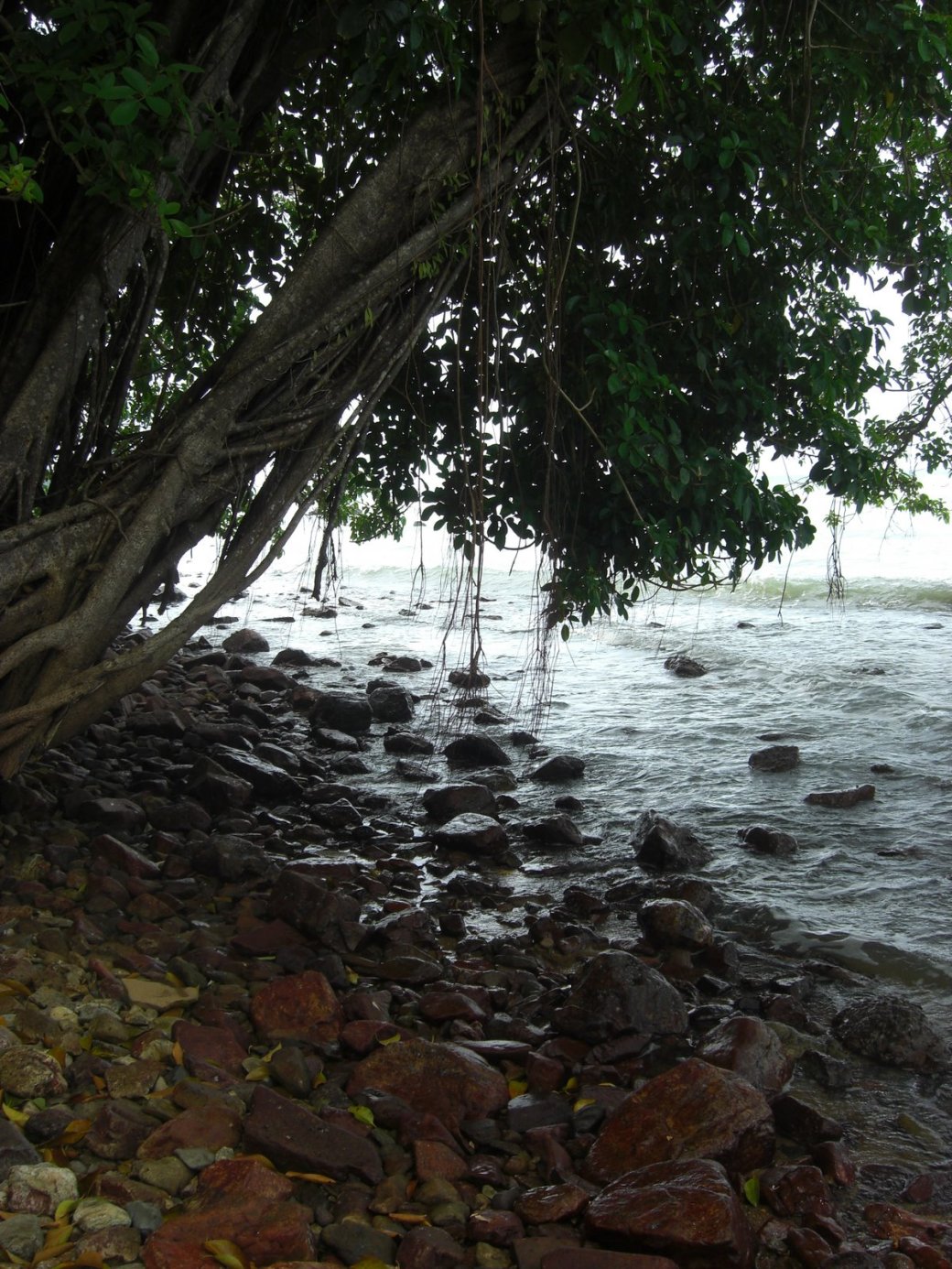 It's not like scrambling over rocks went wrong before... 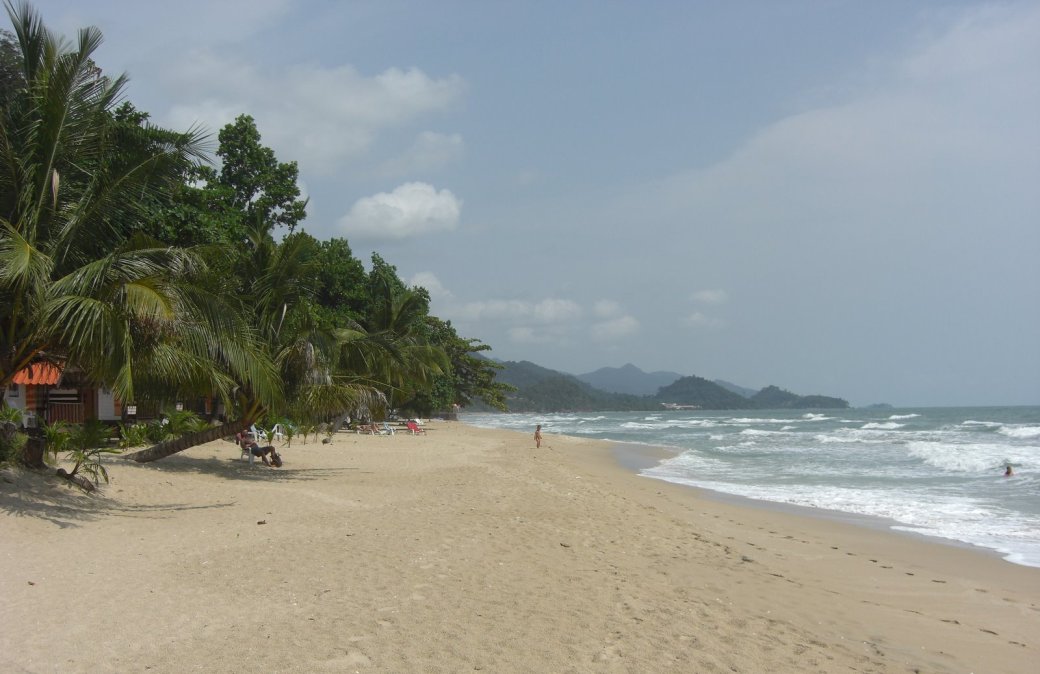 Up north a bit... one of the fancier beaches, White Sands Beach (Sai Khao Beach) 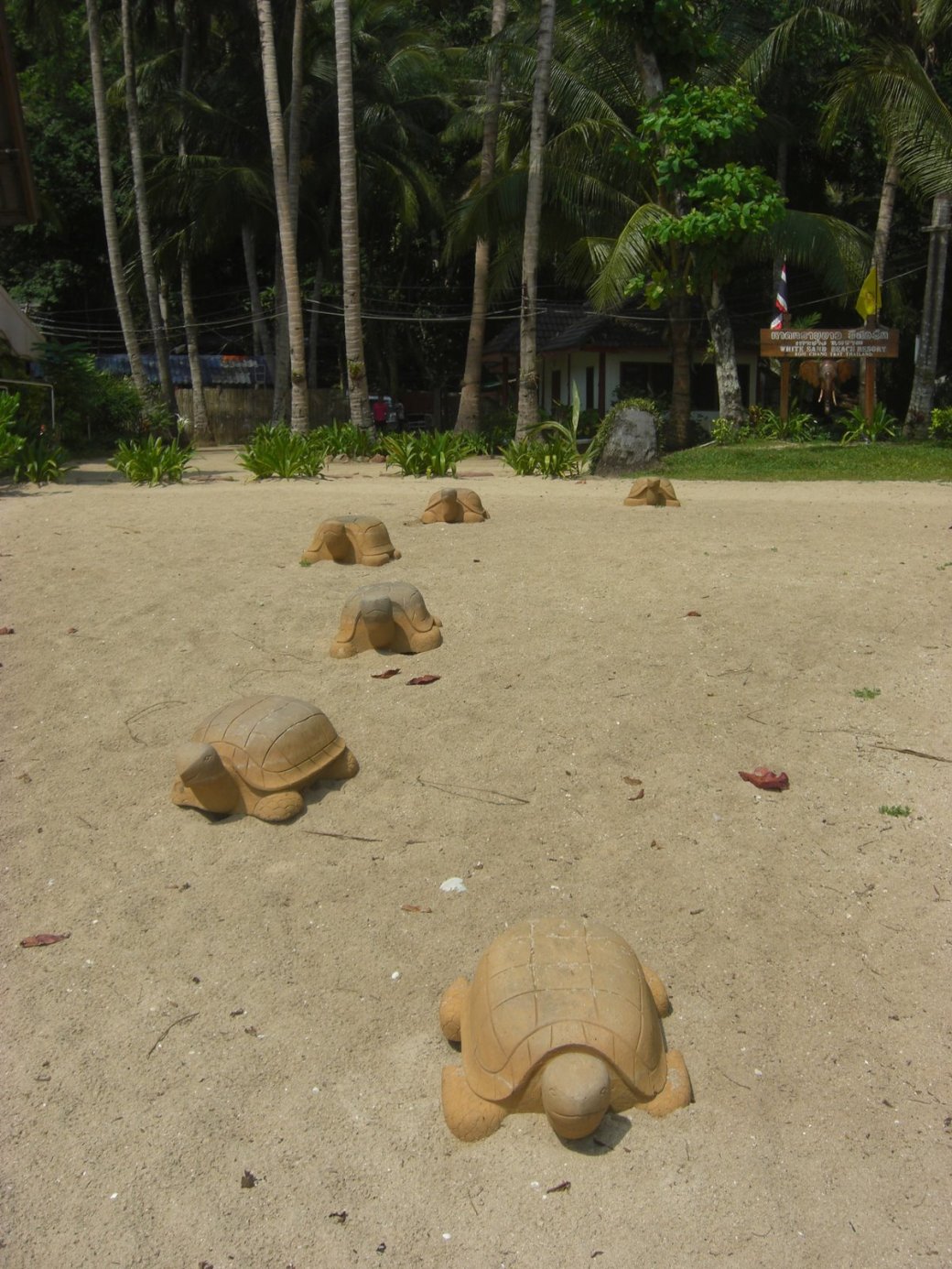 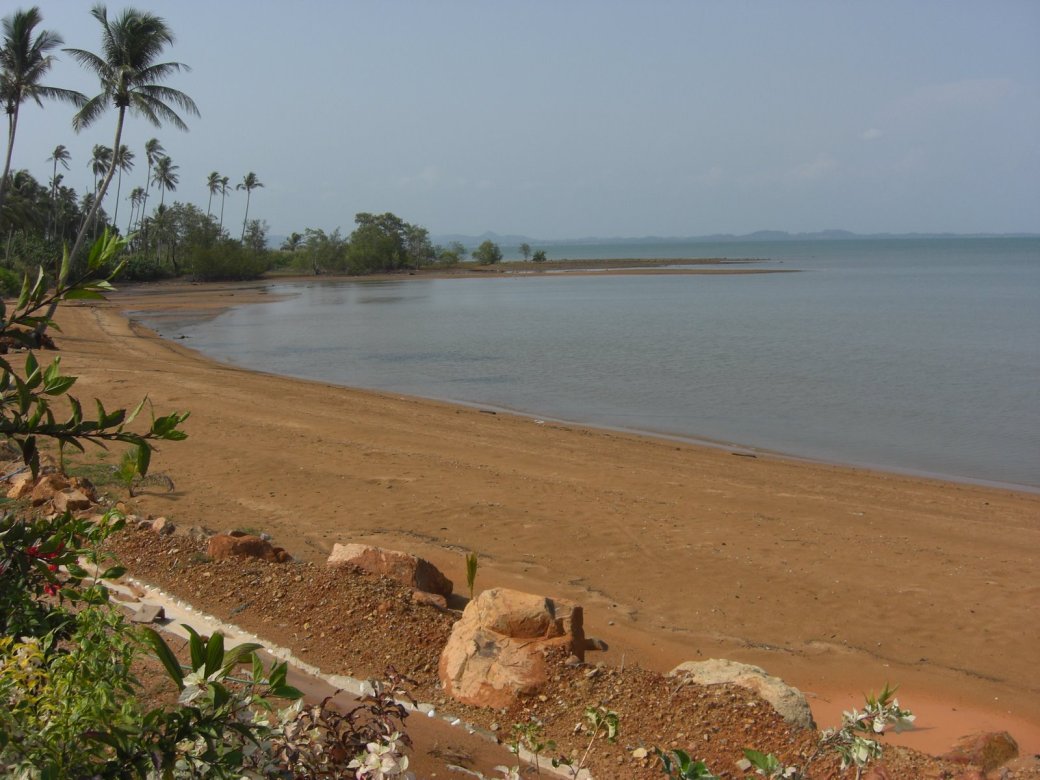 On the northern coast... this beach is mud. Strange thing is, it's still nice 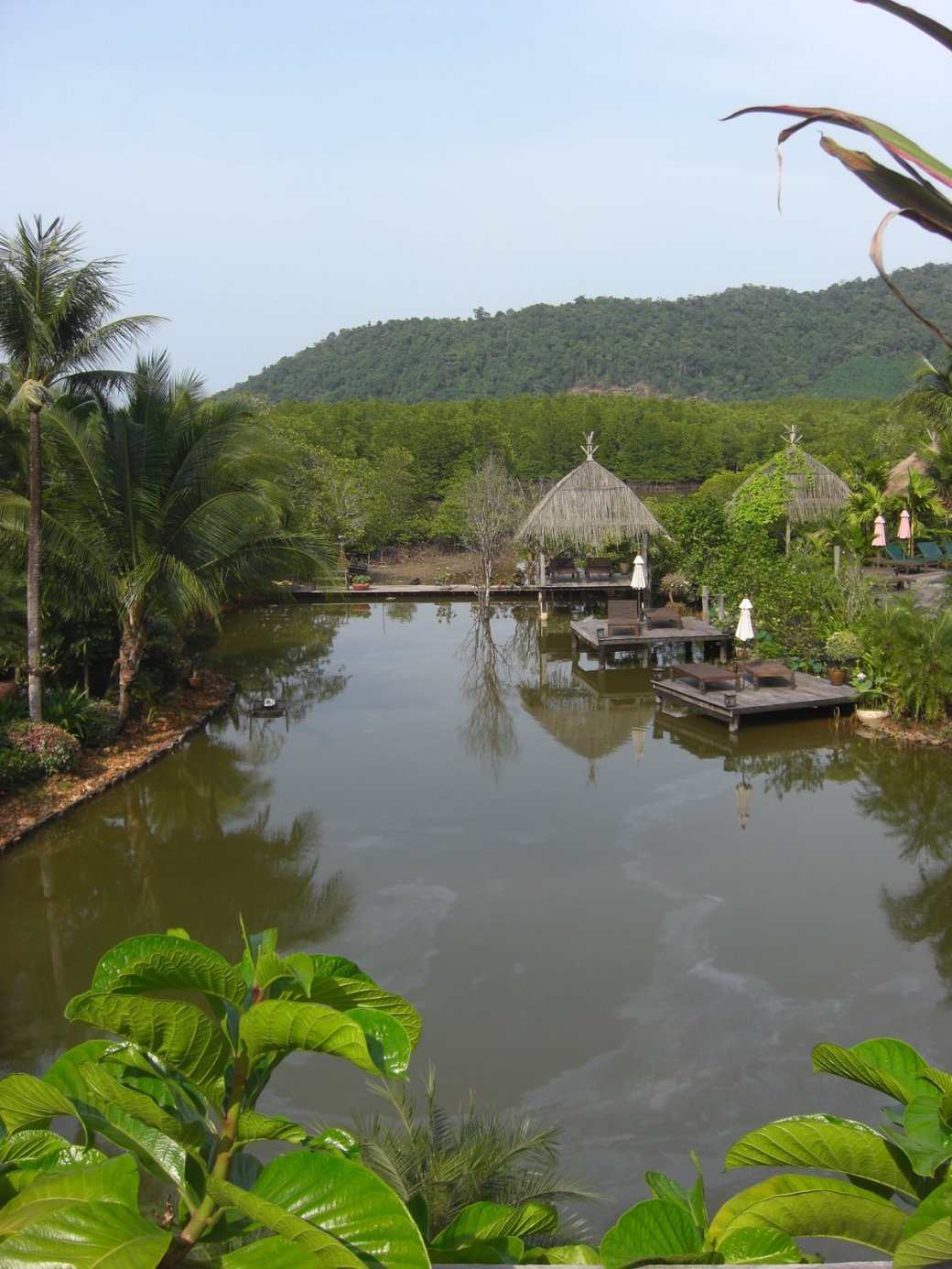 This is where we stopped for lunch. A spa. Thing is that they need to put a bit more effort into that lake. Dye it or something. 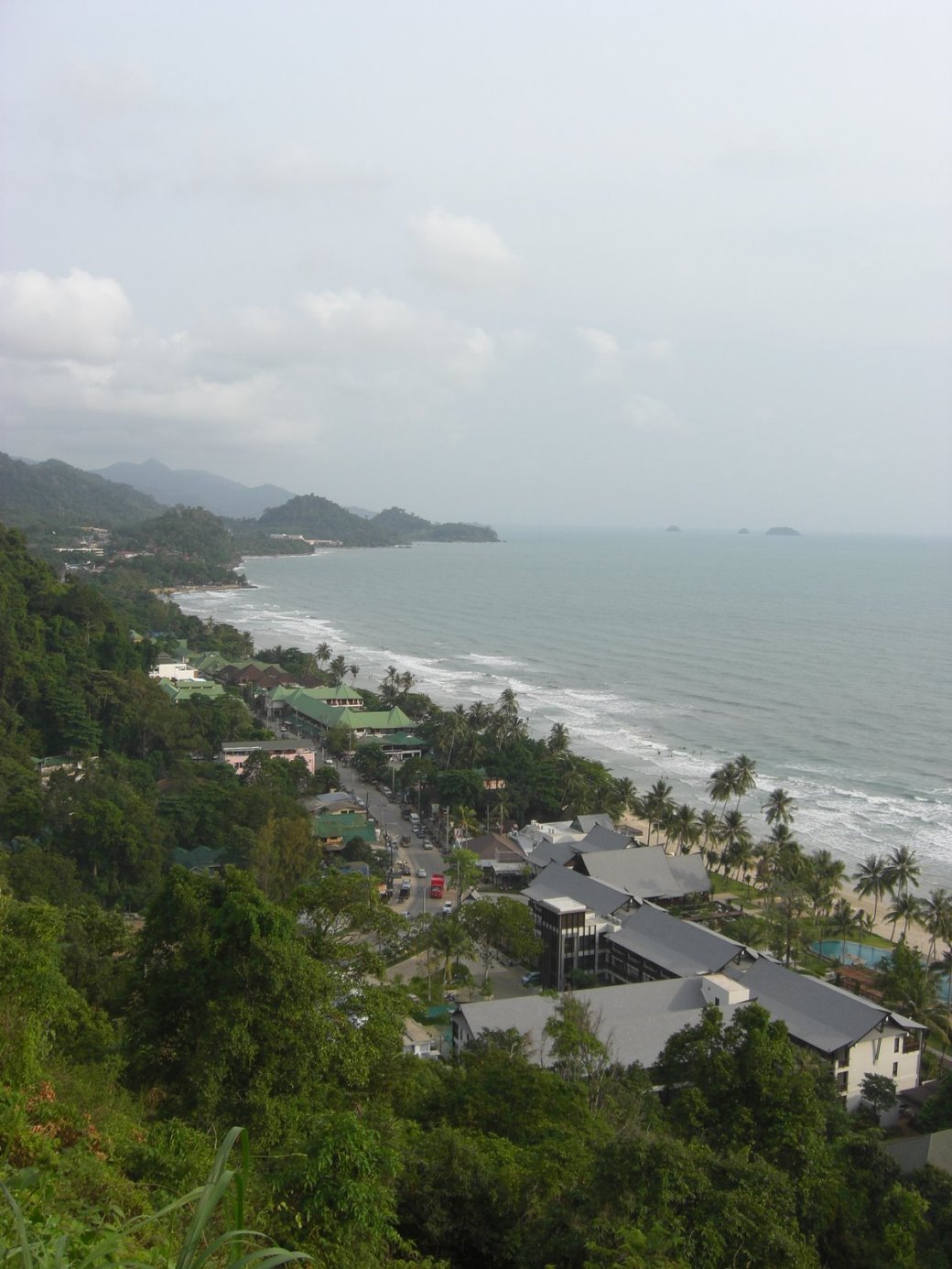 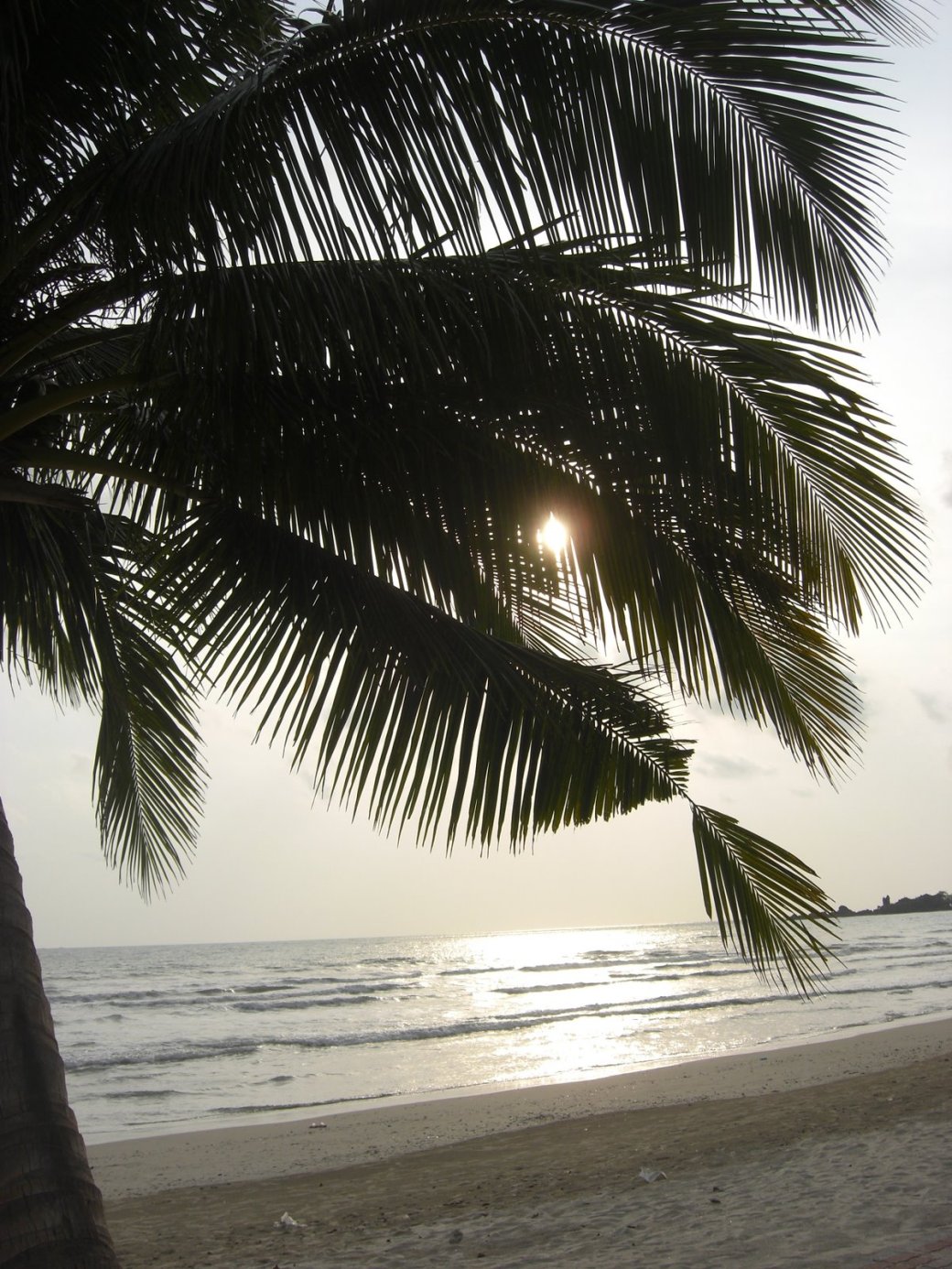 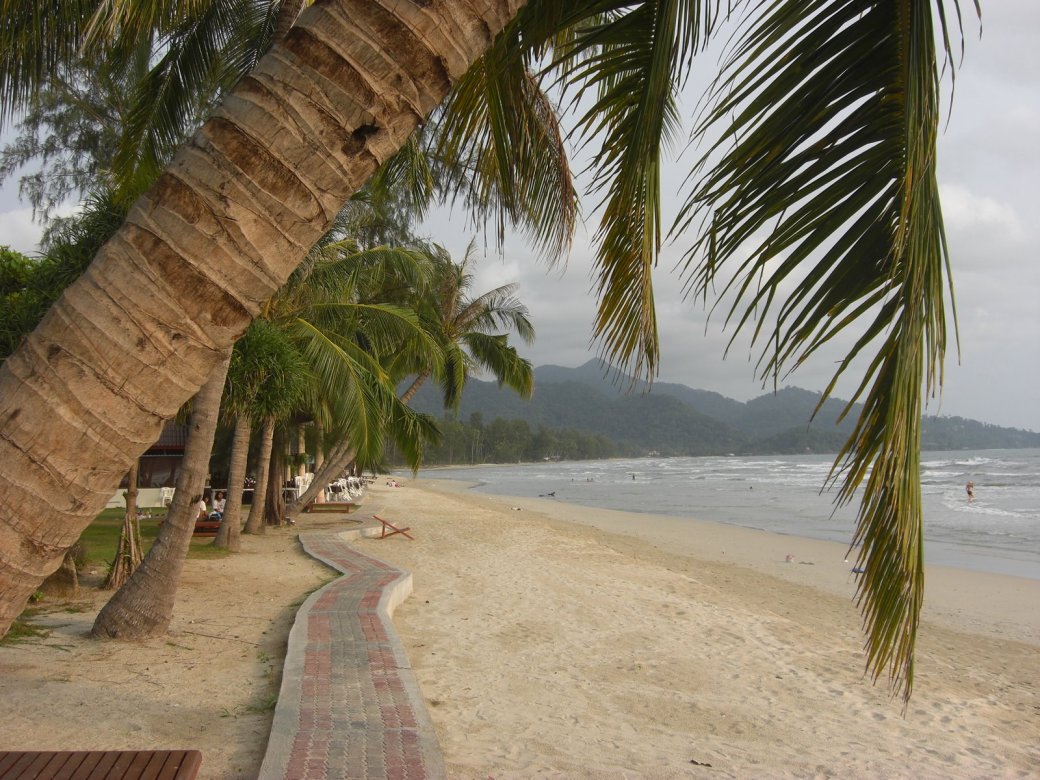 We liked it so much we decided to move here

And that concludes the photo tour of Ko Chang.

That evening we resolved to move to White Sands Beach the next day, but we also went out for a bit of food then got word of a party occuring in a bar up the hill. When we got there it was a mixture of Ladyboy spotting and talking to random travellers who were a good laugh. Completely lost David and Sum, not sure when they left, but I went back just after midnight.

The next day we packed our bags, checked out and then spent most of the morning searching for cheaper guesthouses. The resort we wanted to stay at cost 3000THB a night! Eventually we found a nice spot at a still expensive 1000THB a night, but we were too tired to keep looking.

That afternoon was spent shopping, Skype calling home, chilling in the aircon that I now had and watching TV (which I hadn’t seen for days). The evening was just out seeing the bar scene again, eventually ending up at a fire show.

The next day I decided it was time to move on. David was also leaving and Sum, who had been looking for work on Ko Chang, decided to move to Trat. We headed for the ferry but stopped for 30THB Pad Thai on the way, tasty! 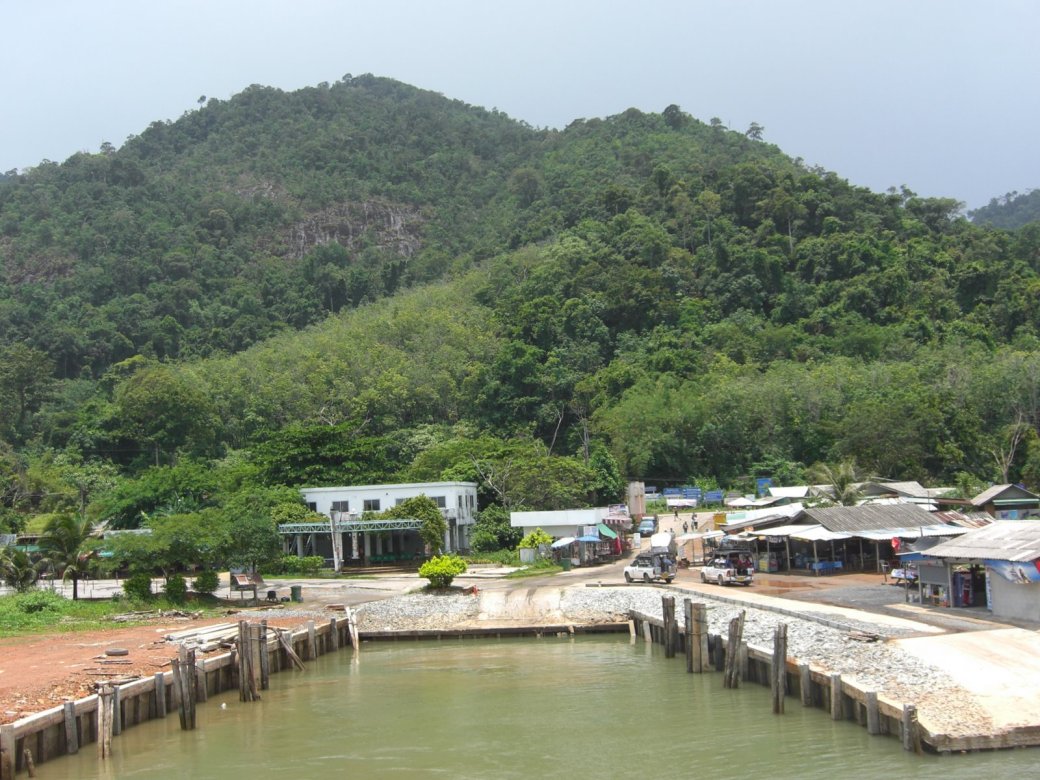 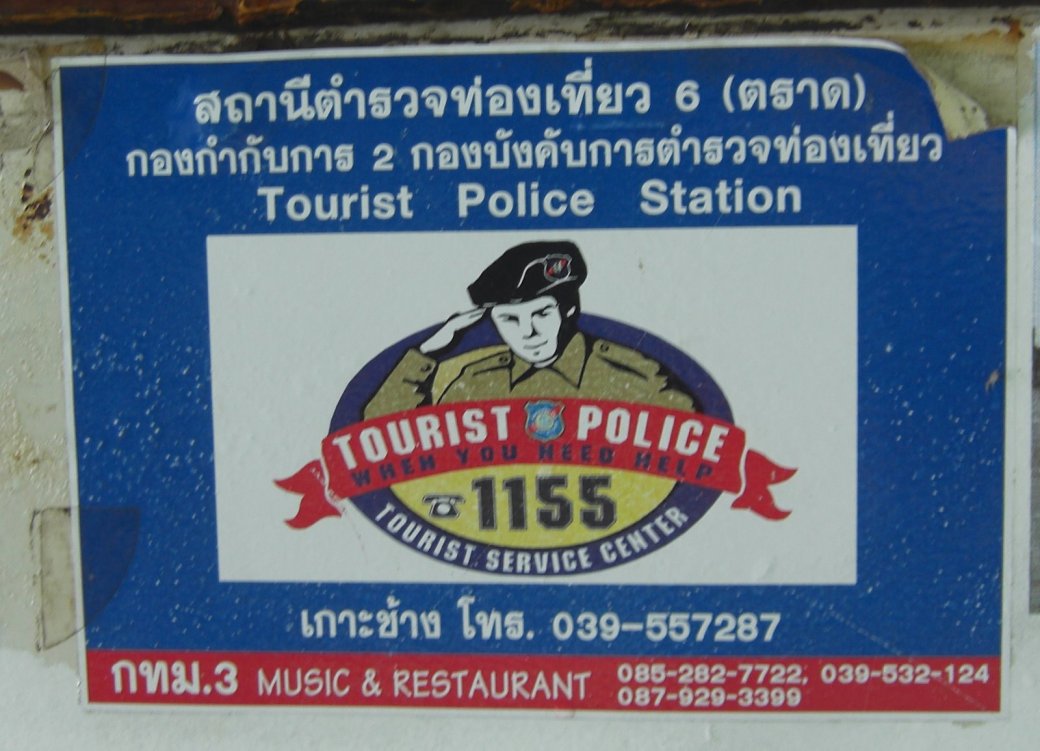 David and I found this sign hilarious, the Tourist Police also run a resteraunt?

We then got a pickup truck back to the bus station, another full on experience if ever there was one. It’s great bargaining with them.

And after a 7 hour coach ride, I’m in Bangkok!

One thought on “Ko Chang”