Bless me for I have sinned, it has been nearly 8 days since my last blog post. What was I thinking!?

So I had signed up for Open Water Certification… not sure what I was thinking when I saw 8000THB/£160 drift over that counter but I knew that drinking would have to be reduced as a result.

It started at 4pm the next day so I had some time to fill… time for an explore and some photos!

This hill was a fairly difficult ascent, but the view was worth it 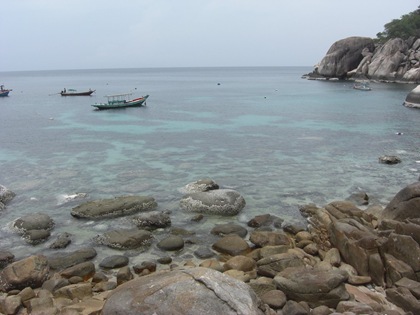 Right over on the east side of the Island! Quite tricky to get to on land but a small paradise when you get there

After my day out seeing the broader Ko Tao (it’s pretty easy just to stay on Sairee Beach all the time if your not careful… but my god it’s a great place) I went back, made a few Skype calls home (Skype is fantastic on the road!) and then it was time to get started

Our instructor was Helen, a fellow Brit who had been out here for about 10 months, and had done 700 dives! There was Bryan, a Canadian also on his first diving holiday, and Nikki, an Austrian who was trying pretty hard with her English.

The first session was DVD watching and a bit of academic work, followed up by some homework. We did have to chose between PADI and SSI, eventually siding with SSI. We were mostly hung as a jury, I was slightly siding to SSI, the main reason (as explained to me by a few instructors) is that with SSI the instructor is more free to teach the course in a manner and order as they see fit, whereas with PADI the order in which skills are taught is more enforced. This can lead to delays and difficulties if one student finds something more difficult, this can be delayed until they are more confident with the other skills and find the troublesome one less of a challenge.

Anyway, 2 hours of DVDs later we all headed for the bar and befriended one and other. Nikki and Bryan introduced their other halves, Sebastien and Carly, and stories were exchanged (as opposed to home work cheated on done) for quite a while. It was already pretty clear this was going to be a lot of fun!

However, something I ate didn’t agree with me and the next day I was… unsettled.

We had another morning of academics (more DVDs) and Helen giving a training session at the bar. I don’t want to get too into my old work ways, but Helen seriously had all the hallmarks of a good instructor backed up by a well thought out course! If I do return to delivering training (and I expect I will) then I really might consider doing a few instructor courses in skiing and/or diving simply to re-enforce my own training ability.

Anyway, after a lot of academics and learning how our bodies, sinuses and nitrogen levels in our blood would be affected, we headed for the boats for Confined Water Diving and Skills! Thankfully the Doxycycline and Lopromide had worked against yesterday’s devil food! 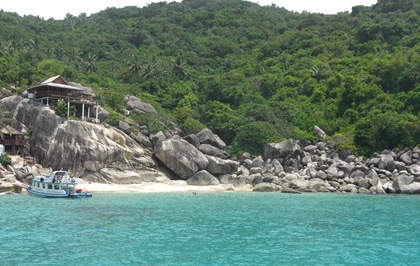 Confined Water Skills involve quite a few things, essentially these are training, in shallow waters, for most eventualities in deeper waters.

Firstly there was a swim test! Twice around the boat then 10 minutes treading water, unaided (although I insisted on a mask, sod salt water in the eyes!). Now think back people, when was the last time you did a swimming test of any sort? Perhaps when you were getting your 50m swim badge? And I was getting my 10m one (I admit it, I was a sissy!). The Humbug Wrase (I think they were Wrase?) were rather interested in what was going on.

Then we got into the Scuba gear, did buddy checks on one another… remember this:

After that we got into the water, swam to shore on snorkels and did skills. Some examples:

There were more too it than I’ve listed, but they are the main ones you do.

We had plenty of air left at the end so we got an extra 20 minute bonus dive (on top of the 4 Scuba dives and 1 snorkel dive in the course), so we headed round Mango Bay to see the sights. Quite a place! Great visibility and we had our first encounter with Blue Fin Wrass…. which like to come up and nibble you to clean you off!

That evening we had a few drinks at Big Blue, then I met up with some of the guys from the dorm room I was staying in (and trying to get out of) and chilled on the beach. Didn’t go to the Lady Boy Cabaret as they wanted me to though!

The next day it was time for the final academic session and even more restored for our first 2 full dives down to 12 metres!

Navakin! Our dive boat for the day!

The Second dive site… but I forget the name! The weather was nicer than it looks here!

So we headed for Twin Peaks initially, our first job was to do the snorkel diving we had missed on the first day in order to get the bonus dive. That was over and done with quite quickly then it was back on board, wet suits and gear on, buddy checks, then down the mooring line to the peaks.

Highlights from this dive included:

I’ll have to get my logbook out for the rest. Rest assured it was pretty spectacular and having an explore was great fun! It’s really a different place all together down there. 85% of all the Oxygen in the atmosphere actually comes from the Ocean rather than Forests as you might think. Furthermore, this place is no more than 1/2 a mile off shore but many people never see it… quite a shame that!

Anyway, back on board we had a Surface Interval to allow the Nitrogen dissolved in our blood to dissipate, as we headed for our second dive site, who’s name I have forgotten completely.

This was more of the same, and no bad thing! Utterly spectacular! We did some skills on the bottom such as sharing air. 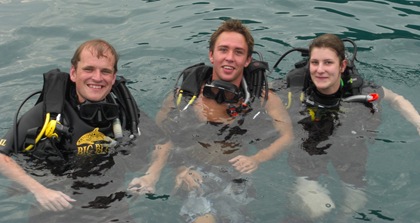 Me, Bryan and Nikki in the water! Remind me to do the cummerbund on my BC up more tightly next time, it’s floating without me!

Anyway, that evening was spent in the bar and Helen informed us it was Kelli’s birthday (one of my first instructor from Discover Scuba Diving)! We decided we had to be out for that so we met up a few hours and well deserved shower later!

We were getting sick of paying a bar premium for beers, and they were not enforcing the no outside food/drink policy… so we started going to 7-Eleven, buying bottles of Leo for a lot less than we would ever get them in bar and then drinking them back at Big Blue… hahahah!

We were heading to Lotus bar for the remainder of the night… and on the way I made fleeting eye contact with a girl on the beach… and then looked a bit harder… and then my eyes must have gone as wide as saucers… It was Rachel from QAS! A former Sales Co-ordinator (now Marketing… err… person) who I worked with on a near daily basis! And I bumped into her on a Tropical Island in Thailand while on a night out for a diving instructor’s birthday!?

After a rather overblown greeting (possibly more overblown because it was 11pm and we had both been boosing for quite a while), and a few confused looks from Bryan, Carly and Helen we set up a quick plan to suprise the absent Jay (also a former Sales Co-ordinator now Marketing x) and then caught up for a bit. Jay and Rachel were the first familiar faces I had seen for 6 weeks (Janet being the last)… wow!

We proceeded to Lotus bar, drank a few buckets and then wound up back at someone’s bungalow where the bathroom was bigger than the bedroom!? Rachel, unfortunately, had her bag stolen… thank god Jay was there otherwise we would really have been returning to the days when I was sorting things in a time of need!

The next day I woke up thoroughly dehydrated, starving and a bit shakey… you see the buckets had M-150 in it. An energy drink, like Red Bull, but I think it has more kick! It also comes in a small bottle and is more of a shot than a full drink!

Full English Breakfast and a 2L bottle of water was tasked to restore me to health for the day! And it worked! Worked a charm!

The next day was our final 2 dives which we rescheduled to the afternoon as we all wanted a lie in/sober up time! Today we had a videographer with us…

After the first dive at Twin Peaks, we got a call over the radio… Whale Shark sighted at Green Rock! Boat at full throttle we headed straight there and got in the water with snorkel kit on. 50 metre swim at full pace to a gaggle of other swimmers and divers. Couldn’t see it at first but then I saw this enormous shark’s tail in the water! After battling to the front of the group I saw this enormous (5 metre) shark. Toothless, feeding on plankton, and with white spots down its back! Truly magnificent to be swimming with the largest fish in the sea! Helen has only ever seen 3, and she has done 700 dives!

After that it was our final dive and we were certified Open Water Divers! That evening we went to get some more BBQ at the Seashell Resort… easily the best BBQ on the whole beach. Feasting on Squid, Prawn, Baracuda and Chicken kebabs at sunset is great! We headed back and watched the DVD of the dives and the Whale Shark, which Nikki bought in the end. We also did some more 7-eleven drinking! Ha ha! There were more instructor birthdays so we stayed out until closing time, relatively early! Great fun!

I’ll post up some images of my logbook later that give a more complete idea of what was in the dives. Let me assure you all, that £160 (+£40 for DSD) was well spent! I had a fantastic time, not one I will soon forget!