There I was, on the way to Waiheke Island. I had done the typical “it’s Thailand” thinking and not booked or even really researched hostels (“Backpackers” over here) before I got on the ferry. Still, all will be OK right… 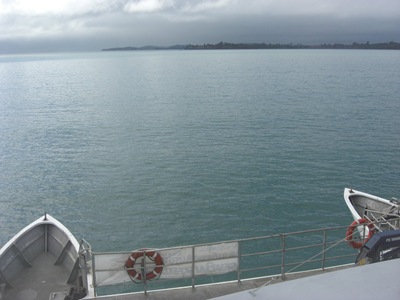 The best sort of forward facing view I could get

Of course, standing there resulted in the odd spray in the face

Apparently this is a popular spot with the rich

I believed the sign that said it was 20 minutes to Ourora Village so decided to walk it instead of spend a whole NZD2.50 on the bus! Maybe I should have just gone with it for ease… 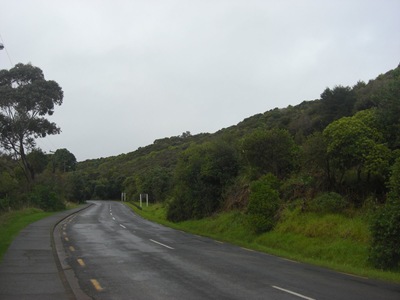 Remind you of Wales? Was a great way to see the place!

I asked at the iSite Tourist Information place for backpackers and thankfully there was one! The Hekerua Lodge. This one was family run and when I finally got there after taking every wrong turn possible, it was fantastic! Mark, was DJing as it was the afternoon off but still happy to give me a wine tasting map, and let me leave my main bag in the sitting room. There was a pool, spa, plenty of outside areas (although it is winter so I didn’t fancy it) and inside the lodge part you had a decent kitchen with 2 range master style cookers, several microwaves, plenty of pots and pans as well as clean bathrooms etc! But the best thing was that the sitting room you could use really felt homely. Bit TV, wood fire (like my Mum has back in the South of France), comfortable sofas! It’s great! Top marks!

Anyway, I went back out and headed of for a fairly long walk around a couple of the local Vineyards.

The first one i found, oddly the further one away, Kennedy Point

Sort of felt a bit more like a farm until you got into the tasting room, I liked that a lot! And the lady who did the tasting was very knowledgeable! 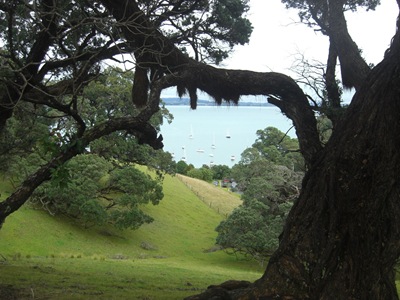 And the view they had was pretty spectacular!

Well, I didn’t expect quite so many boats

One of the arty shots

And I just liked this one

Anyway, I hiked back up the peninsula past the school that was kicking out and eventually came across the first vineyard I had intended to go to…

Hope that sums it up

This was inside the tasting room. You see those 3 cases in a row (just below the standing bottles) – well that’s a bottle from every year this place has been open showing the evolution of the taste

I liked the Waiheke Red so much from here I bought a bottle (I really need to watch my money more!). I then hiked back to Ourora and checked the village out. There didn’t seem to be much in the way of nightlife for backpackers, but I did see a nice looking Fish & Chip place that I decided I wanted for tea (but it was 3 in the afternoon). I then headed to the beach… 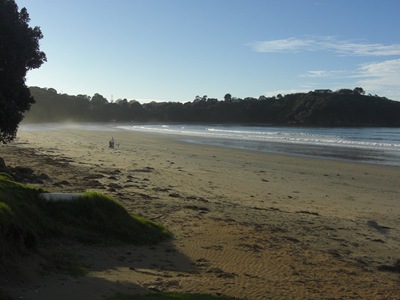 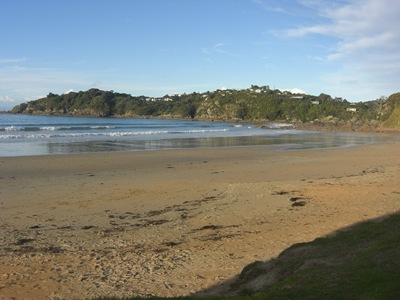 But the best thing about this beach? There was an open WiFi network I could use to catch up on emails, get some PDFs of Wikitravel for my onward journeys and advise Alan on how to set up his new website!

Once the battery was depleted I headed back to the hostel for a bit and enjoyed that sitting room. I then decided to go back to Ourora, to find that the restaurant part of the chippy was closed this time of year. I decided to go have a look around, found nothing else so I decided to get some beers in  and then go get a takeaway Fish & Chips. However, by the time I got back there the takeaway part was also closed!! At 7:30pm!? What?

I wound up hiking across the island back to Surfdale where there was an excellent pizzeria, but NZD25 felt like a lot, as great as it was! But they let me drink those beers I bought so I was happy.

Then I went back to the hostel and had a night in essentially, and one where I felt right at home. Watched Man vs. Wild, The Colbert Report (which is currently in Iraq with the USO, and is hilarious). Slept pretty well.

This morning I decided to head to Coromandel, but discussing it with Mark the Lodge owner, it seemed there was not a direct ferry back after all. However, he did me a massive favour by giving me a lift to the ferry back to Auckland! Great guy. If your ever on Waiheke, be sure to stay at there! It’s great!

I’m sat writing this on a bus to Thames! Think I’ll be based out of there for this part then perhaps hit Hot Water Beach tomorrow. Who knows when this post will see the light of the blog though, I have 5 queued ready to go!

Also, just an aside, while writing all of them I’ve been listening to Adam & Joe’s podcasts! Funny, and a great way of hearing from home!