Kind of regretting letting this fall by the wayside after I came off the travelling run. There is no way I’m generating enough content for as frequent blog entries any more, but I think I’m going to try and keep this going whenever I go travelling or do something interesting at the weekends. There is, however, the requirement for a catchup blog.

So I’m working hard in my new job in EMR (remember, I keep work anonymous on this, it’s a personal endeavour for me. Been putting quite a bit into this job, been giving me some great experiences however, especially a trip to Courtenay, on Vancouver Island, towards the end of last year. My decision on my PNP Application has been made but gets sent to you in the post… as I write this it’s still in the post a week later! I’m on tenderhooks I tell you!

Whistler has been visited plenty of times! I’ve done 9 days up there (remember, I don’t have a car and have to crash on people’s sofas, it’s not my seasonal days anymore)! Must admit, my skiing has gone downhill (no pun intended) since my seasonaire days! Been meaning to do a few more mountains but kind of got bogged down in work and other weekend activities. I’ve taken up snow shoeing too while the Grouse Grind has been closed. Strange thing to take up but I’ve been having a great time exploring. For those of you who keep an eye on my Facebook, Picasaweb and other feeds will probably see photos flying up every so often of my trips round Grouse Mountain (a membership there by the way is a great thing!).

This is why I snowshoe... you see views you will never see in any other sport, I couldn't see this when skiing... and I'd only see something like it when hiking

I don’t normally talk too much about family on here, but I will let you know that I had a great time when Mum & Bob came over just before Christmas. We spent a week in Vancouver (with me working the early shift at work to maximise time with them). However, Bob broke his wrist, badly, on the 3rd day and spent 24 hours in hospital. We managed to make the best of it and honestly, it didn’t stop us. We headed to Sooke, on Vancouver Island, for a few days as well and rented the AMAZING Stone’s Throw Cottage for a few days… I’m seriously considering organising a mass party weekend there… it’s great! Felt like home.

We went to Victoria, which we all thought was a very British place! Had a great time roaming the streets and enjoying familiar looking architecture and look and feel. We went Whale Watching (ironically, back towards Sooke) and saw plenty of Orcas in the Juan de Fuca straights. Bob forfilled a lifelong dream there… bet he didn’t think he would be doing it with a splint on!

A very lucky shot of mine!

This is the oldest lighthouse in BC - originally from Scotland

Christmas was spent in Whistler, and I had a great Christmas meal thanks to Catherine & Peter! However, that morning I had stacked quite badly in Blackcomb Bowl, damaging 2 ribs. This sent me to the Chiropractor for a bit… paid for by benefits!!

Me, nursing those ribs, with 7th in the background

Isn't this a great place!

A few weeks after that I went back to LA to meet Dad and see our family friends the Brandon’s! Remember my first trip? I was staying in the Holiday Inn down the road! Met up with Dad and caught up in person for the first time in 10 months. Had a great few days touring round LA with him and one of his work colleagues who was also staying. Saw the Brandon clan including James & Katie. This isn’t the most memorable thing about that meeting (James & Katie, you know what that is) but Katie has a great trick with wine corks that you should never try to confidently copy at the dinner table… practice it in private first whatever you do!

There’s something I can’t forget to mention, seeing the Olympic Flame at Lonsdale Quay one cold February morning!

I only have the Blackberry shot for this one... i might edit in another later!

A day later, I’m jumping on the plane back to the UK for Pete & Beth’s wedding in Southampton. I flew in, got the train down, met up with them all and gave Pete & Beth their “thanks for having me” present (not wedding present) of 2 boxes of North American Ceerios for Pete and a box of Lemon & Ginger Tea for Beth. We then went to Pete’s Parent’s place for dinner (keep in mind that meals cooked by anyone’s parents are rare, and Pete’s Mum knows how to cook!!!) then headed out for a few eve of the wedding drinks with Pete, his Brother/Best Man and a few of his friends… may have gone a bit far for a person who runs 6 miles a day!!!

I slept solidly through (jetlag) but must have had quite the look on my face when Pete’s Dad told me Pete was clearly hungover the next day!

Anyway, great ceremony, great reception and great company. Had to duck out early and do a 6 hour train ride back up to Yorkshire and see it for the first time in 11 months! Was great to see the family (both sides – a great deal of them) and have a week chilling out with my dogs who I’d been missing. I managed to pack in a trip to Norwich to see folks down there too! Just what I needed. 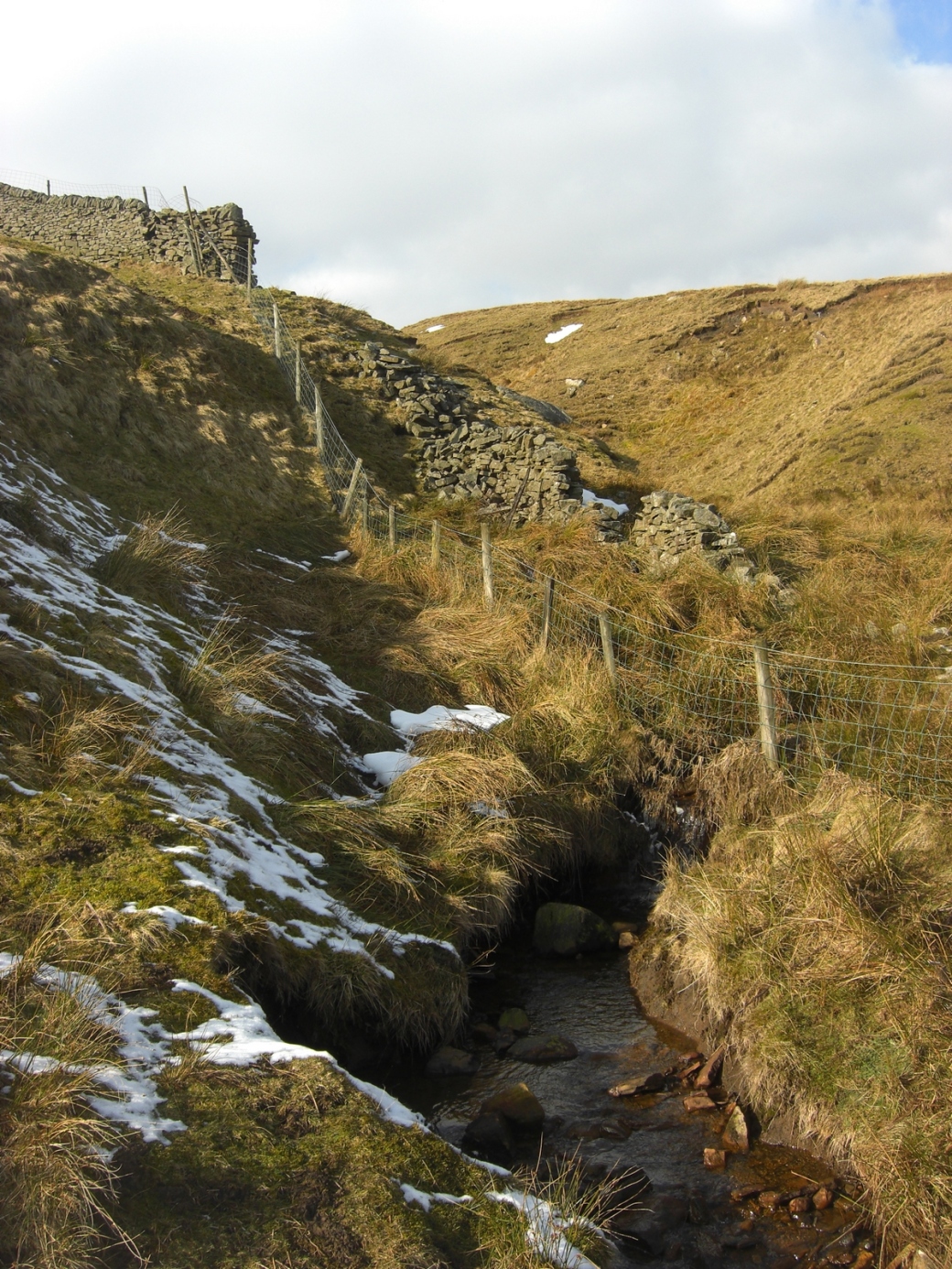 I took these up near Scar House reservoir on a dog walk... nothing quite like the Dales

One thing I will say about travelling between places is always try to go back to them at the same time of year if you have been away a long time. I left in Winter last year and came back in Winter this year, just as I left and came back in Summer to Vancouver last August… feels like slipping on old shoes. Speaking of which, I raided my old clothes  and dragged out some stuff, and went back laiden with Yorkshire Tea, Chocolate and a 1L bottle of Jager I had!

Flying back, I went LBA (Leeds/Bradford) –> AMS (Amsterdam) –> YYC (Calgary) –> YVR (Vancouver) – the bag made it to Amsterdam before taking it’s own little holiday. Took days to get it back and when I finally got it, the lock had been cut for searching… I PAID EXTRA FOR A TSA-OPENABLE LOCK!

The Olympics were epic! I won’t soon forget becoming a full on Team Canada fan and watching them win Gold! Then the amazing party in downtown afterwards! I have never seen such huge crowds on Granville Street. I have never given so many high fives!

The next month was taken up with house hunting, hard work and then moving in to my own place at last!

I now have my own place! Rented a 1 bedroom apartment in North Vancouver, Lower Lonsdale area. Not far from the Seabus. I’ve been in it 2 weeks, it smells of new IKEA Furniture, has a sunny balcony and is finally a place where I can do whatever it is I want! Housewarming coming soon! Furthermore, I have a full, proper bed to sleep on at last! No more air matress. 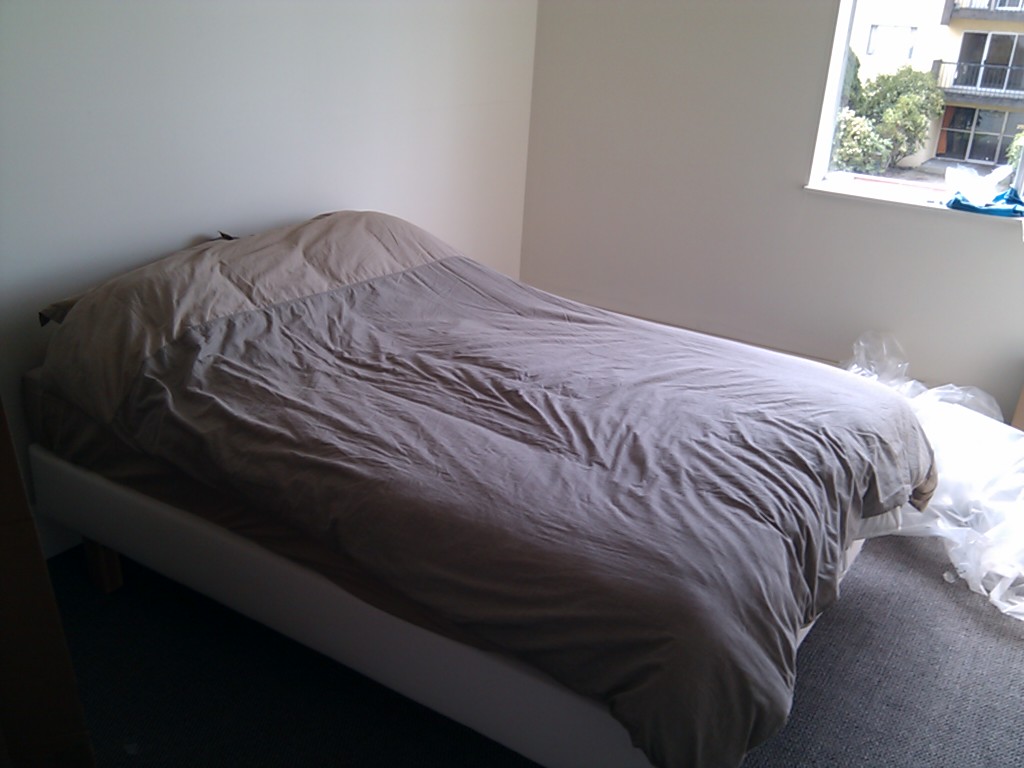 I really appreciate having this!!!! Beds are luxury.

And I have these to chill out on... although I only really use the one on the right of the picture as it has the best view of the TV!

This place is great! It has a beer dispenser in the fridge!!

Anyway, since these photos were taken I’ve tied up some more and added more furniture. Its slowly becoming home. Need to hang some photos on the walls etc.

By the way, I took those 3 on my new phone, a Google Nexus One!

I don't get tired of this view 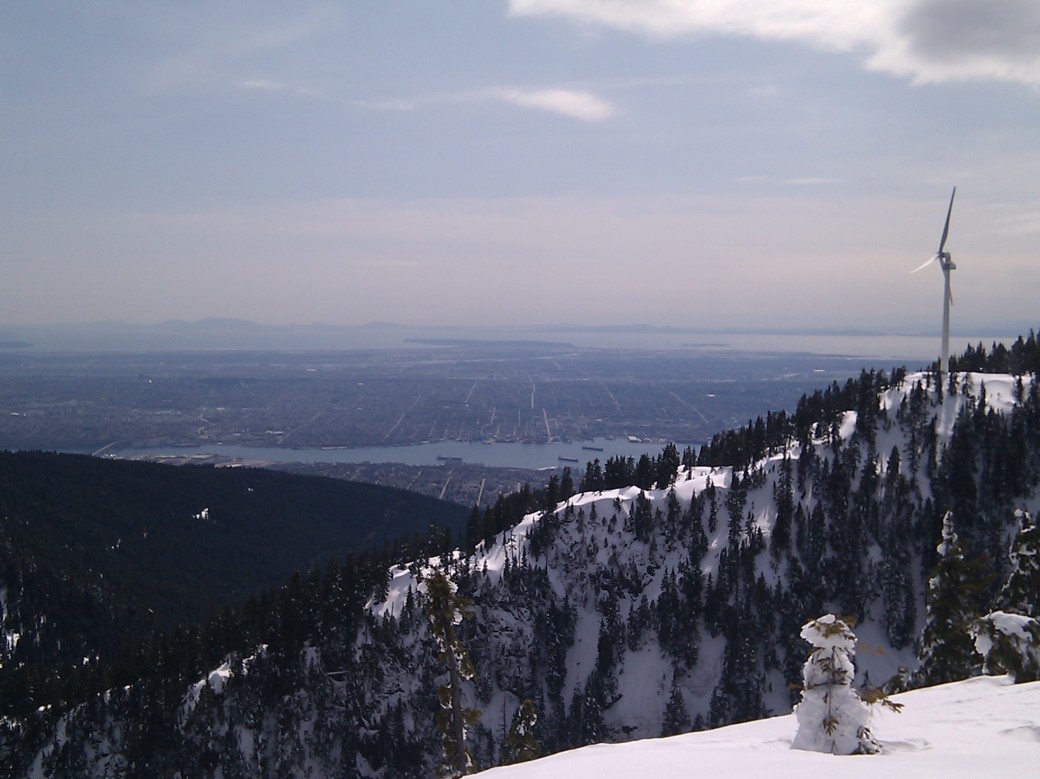 That's Grouse's Wind Turbine on the right - generates 25% of their power needs when it's turned on! Vancouver looking spectacular as ever!

Meh… why not upload a video of me sliding down and it going wrong:

I told myself I wouldn’t be making this all photos… but here I am… I suppose it’s because I mostly blog about travel.

Hopefully with Spring I’ll put a bit more time into this, since I’ll be doing more noteworthy stuff… It’s no fun blogging about day to day I tell you!

That's the Vancouver Downtown skyline from Lonsdale Quay... I can see the same thing from my office window! I think I'm onto a winner!

Keep in touch everyone!