Why do I point out this is happening in Summer? Because there’s every chance I’ll be going back in Winter!

A couple of weeks after the White Water Rafting fun, we decided more hiking was in order! Garibaldi Provincial Park it is! Organised by Christina and Stephen (both of whom also organised the Juan de Fuca trip) and attended by Hannah, Mark, Scott and I…. but the thing is, Hannah, Mark and I couldn’t make it until after work. We were going to have to start this hike at night.

Isn’t this about the time the serial killers come out?

Great time to find out the new rechargable batteries, that Duracell claimed were “precharged”, were actually not charged after all, and therefore my headlamp was out of action. Fortunately, I have a backup light. 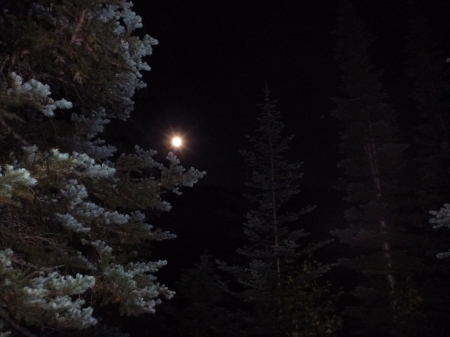 I’m not kidding about this night thing!!! Thankfully it was a full moon!

It seems 8km uphill took longer than we thought, so we arrived about 90 minutes late arriving at Garibaldi Lake Campground. Stephen was on the sat phone to us and there was a very relieved look on Christina’s face. There was a slightly more bitter look on someone else’s face when I accidentally used his stove, thinking it was ours.

Next morning, this is what we wake up to!

This was an awesome way to wake up! 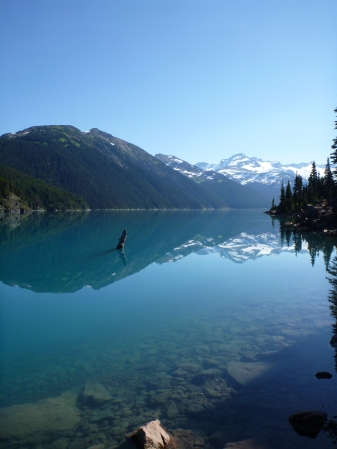 This looks a lot better when the sun is up!

Our first day hike was to Black Tusk, which I’ve seen many times from the top of Whistler, but never been to it. I’d forgotten to bring a smaller backpack, so had to borrow the top of one of the backpacks, which handily converts into a bumbag! 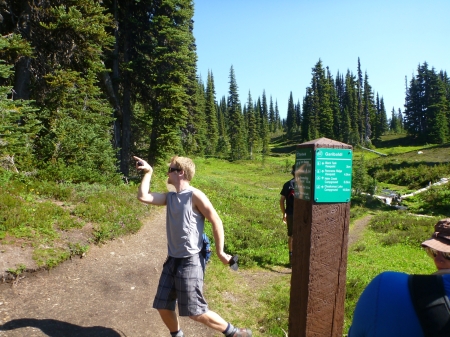 Scott’s idea of directing us!

Did I mention how awesome the view is? 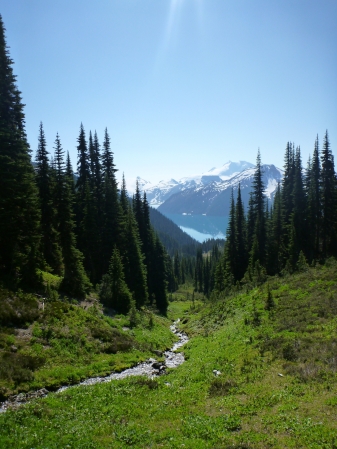 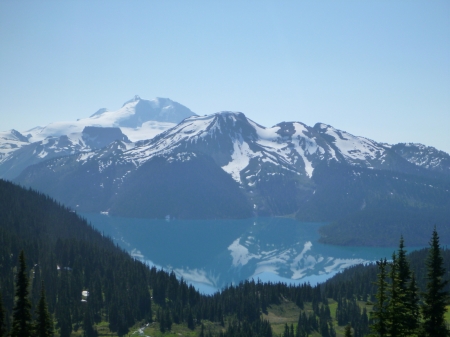 Yes, awesome (and I’m running out of caption ideas)

Stephen, admiring both the mighty Black Tusk, and the 1km of snow, scree and uphil between us and it! 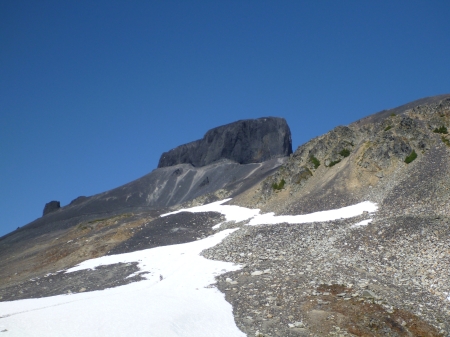 This was pretty much the going for this bit, probably the hardest single section we did

However, we persevered and made to the top!

Looking out over the edge, long bloody way down!

So we were wondering back down again when we take a good look at the slope to the West… and quick as a flash, Mark and Scott decide bootskiing is in order! 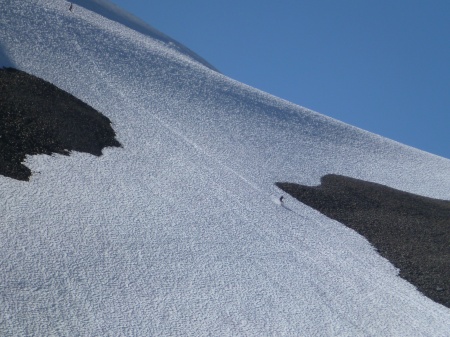 And they were pretty good at it!

Of course, Stephen and I looked at each other and decided we had clearly missed a trick! We were both skiers, so we must be born to doing that!

This is the middle of summer! And yes it was tricky to walk up!

So there we were at the top of the cornice, looking down… I mean how hard can this be!?

Yeah, it wasn’t so easy, I’m that large spray of snow on the right! (note: Christina took this on Mark’s camera)

Complete with ice burns on the arms and numb hands, we headed back. As we neared the camp, we found this: 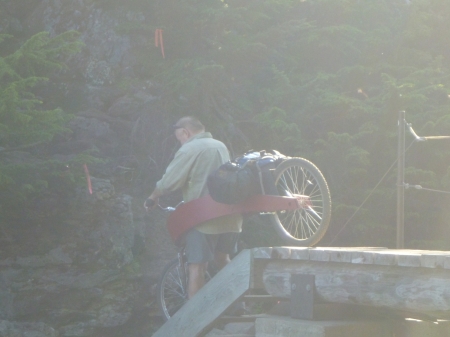 Can someone explain what this strange sit in bike thing is? It was going over the bridge and down the stairs at the time

In terms of the budding photographers among us, this evening was going to be great! We settled down to the bagged dinners, while enviously looking over at the folks who had brought up an entire stirfry with them! However, we were seeing scenes like this! 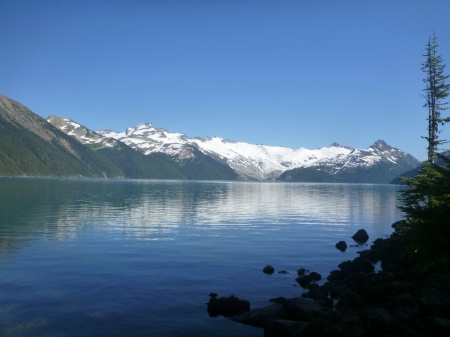 Note to self: Buy reflective clothing for shots like this!

60 second exposure of Garibaldi Lake at night! By far my favourite shot!

Reminder, I’m using my Lumix TS3 for this! However, all of today’s fun had taken it’s toll on the battery. I was getting critically low and one more day to go.

The next day, we were heading to Panorama Ridge before we hiked down. Yep, 26km in one day! I had to be a little more frugal on the photos given the battery situation, and even borrowed Hannah’s camera (not that I have the photos from it yet missy!)

But this view made the grade!

As did this one of the Tusk!

After that, I was fully out of power, so the rest of the photos are from Mark’s camera. 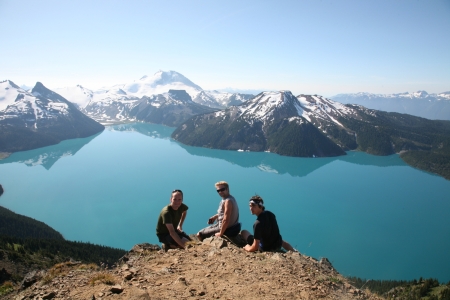 Me, Scott and Mark in front of Garibaldi Lake!!

Then we caught sight of a nice downhill slope… and decided that it was time to try out bootskiing or just arse-sliding down!!! 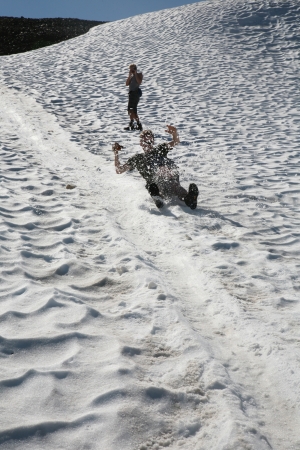 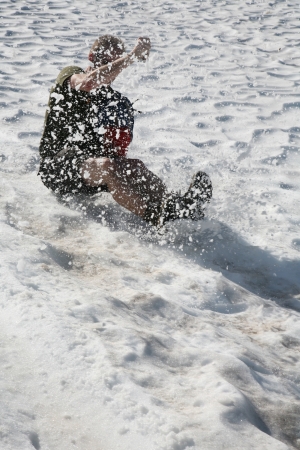 Thing is, in this situation I tend to bite off a little more than I could chew. After Christina had a great slide down the next slope, then deftly caught by Mark, I basically lept into the slide slope, which was a little more slippery than anticipated! It’s not on camera, I essentially flew (catching air a few times), down this. Mark pretty much decided that 87kg moving at speed was far too much to stop, so I flew down twice the distance of everyone else:

Me, with a load of snow melting off my face!

So back to camp, where Stephen and Hannah (who hadn’t come out that day) had squared everything away. We did however have a visitor:

Hannah thought this was great!

On the way down we passed The Barrier (that we can actually see now, because it’s light)! This huge lava dam, that creates Garibaldi Lake, is degrading. Have I mentioned there was an earthquake nearby recently? Might have shaken a few things, just in time for us to see it, and Mark to photograph it:

Impressive rock slide when you see it in person!

EDIT:
Here’s some extra research links for everyone: