So here we are again winter! You think you can stop my hiking habit!? Of course not. Better still, I’ve worked out how to use the Gallery Shortcode on WordPress.com!

Christina (from the Garibaldi and Juan de Fuca trips) had once again done us proud and organized a snowshoe hike to Elfin Lakes Shelter in (a different section of) Garibaldi Provincial Park. Christina, Harini, Mark, Scott & Whitney, Stephen and I were going… only Stephen had winter camped before!

Preparing for this one presented a few problems. Firstly I didn’t have a winter tent. I do have my great MEC Camper 2 tent, but that’s 3 season rather than 4, and contained meshing. This attracts condensation that then snows down back on top of you, and melts from your body heat, making your bag wet. Secondly, the bag itself was rated to -7C. I could increase that to around -12C with a fleece liner.

Well, I would just throw on some more thermals when I slept. Heavy arse bag packed, snowshoes and winter boots at the ready, I woke up at 4:30 to transport myself, Christina and Harini up to Squamish to meet the gang, under a lunar eclipse of all things…

We got to the trailhead and set off. Quickly, we realised we had hiked above the fog! 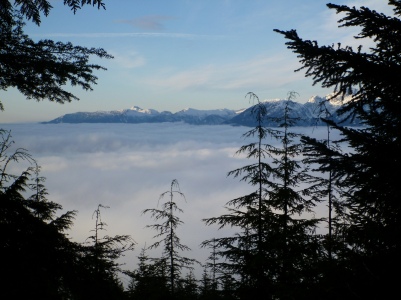 Harini’s backpack did need repacking due to being heavily loaded at the top, but no matter, we were soon all plodding on nicely. Whiskey Jacks were about and up to their normal scavenging ways… 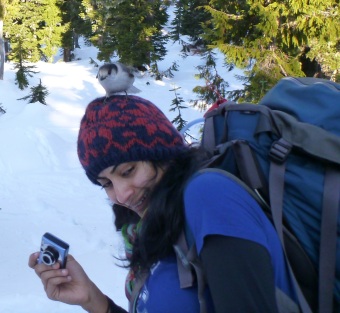 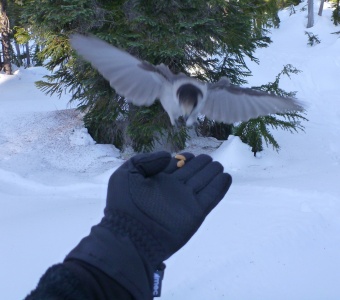 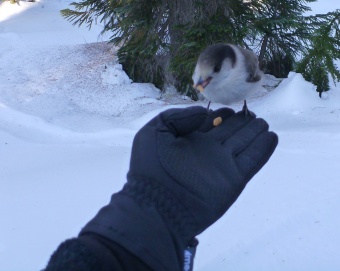 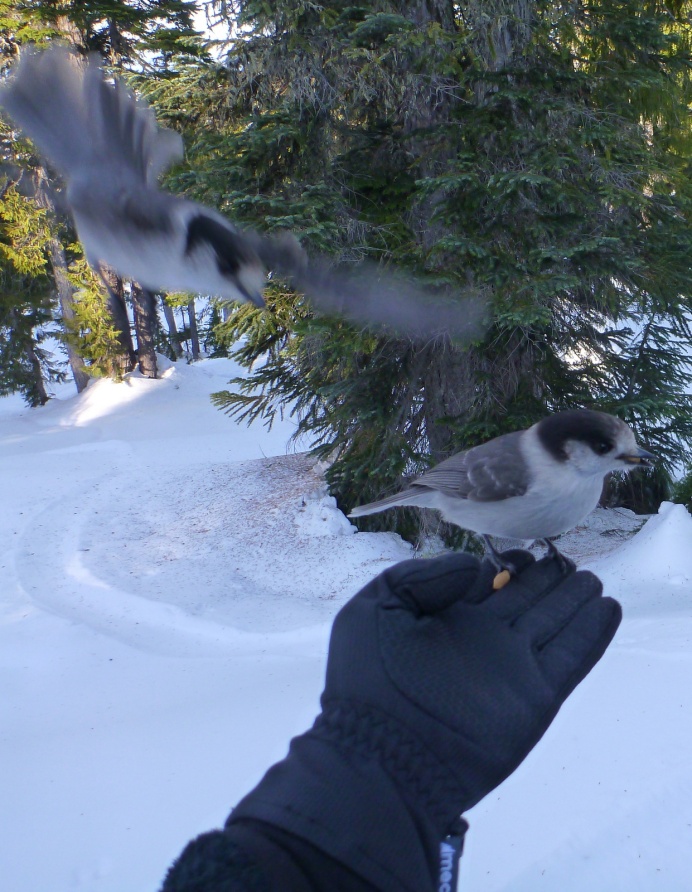 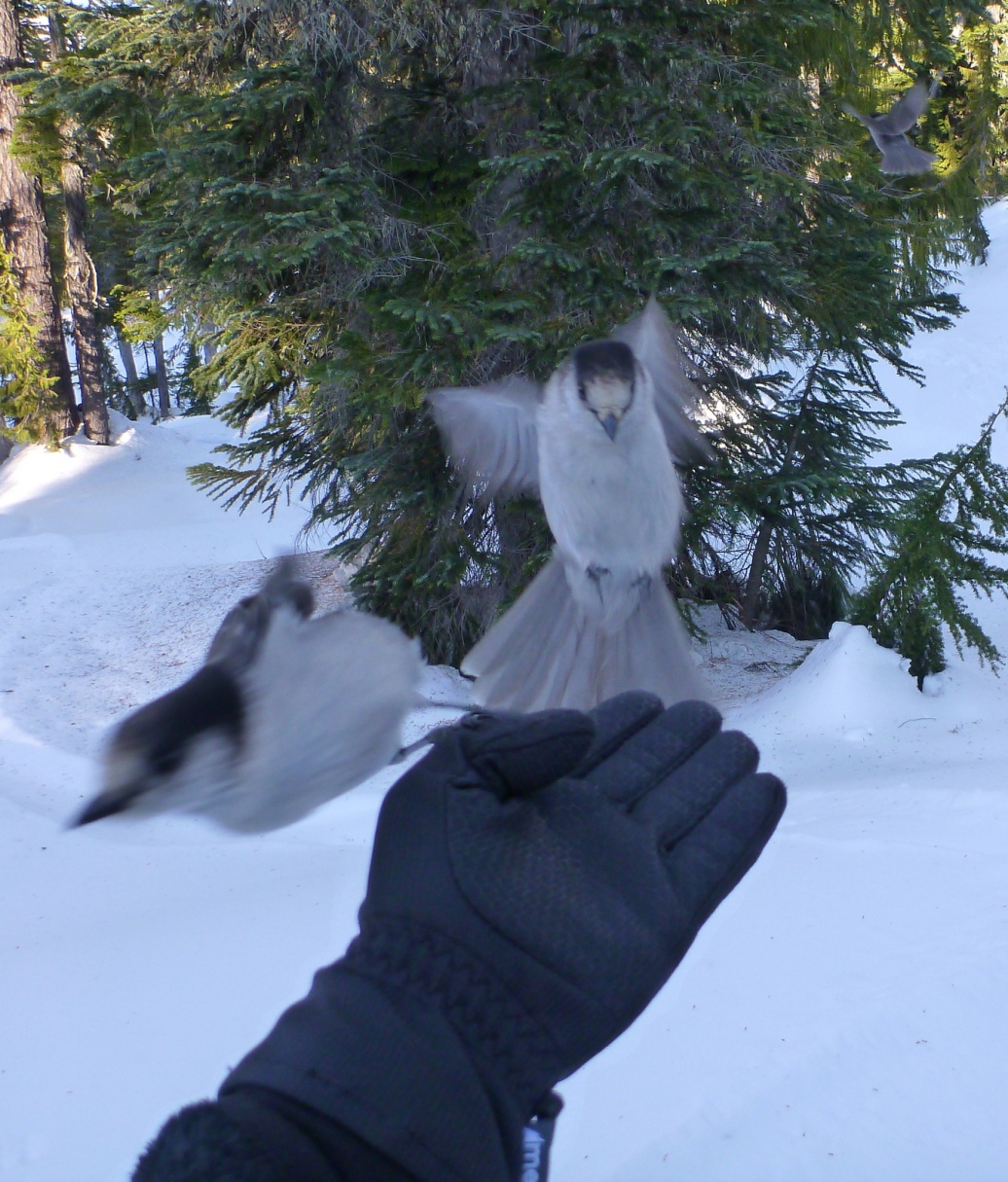 It was around this time, after a huge long uphill switchback section, that Harini and I realised our snowshoes had heel lifters! This makes going up hill more akin to walking up the stairs, much less effort! We were kicking ourselves!

The higher we get, the better the views got! 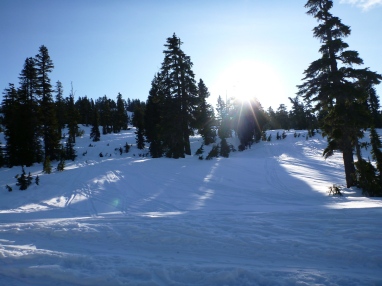 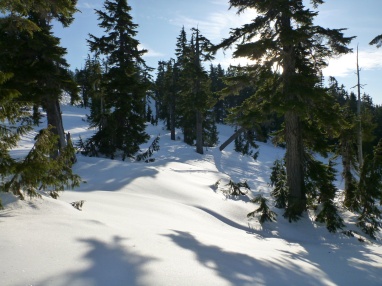 Eventually we reached Red Heather hut. This is a warming hut that had been built up here, complete with fire and tables to relax in. Can’t camp inside it though. That said, if I were stuck in a snowstorm or something, damn right I’m sleeping in there!

Quick lunch and a chance for some photos of Mount Garibaldi! 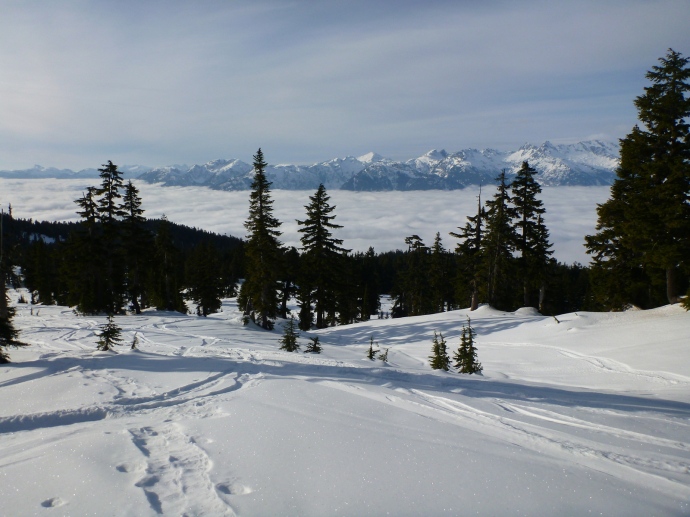 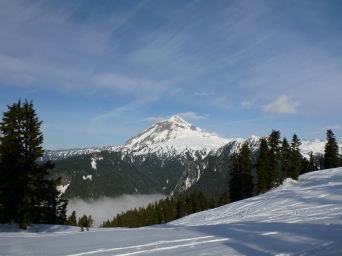 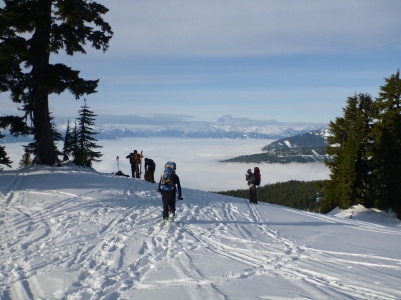 We had intended to go a more northerly route, which took us below some avalanche slide paths. Here is a little lesson in back country travel. Lesson one is that you should go and get a REAL lesson in it (I’ve done Avalanche Safety Training 1 for example). Lesson two is always travel with a beacon, probe and shovel. Lesson three is where this story actually starts. Essentially slide paths are slopes with the potential to avalanche, and then the movement the snow will take after that. A slide path can be varied, but typically a clear slope with an angle of 25-45°. You can spot some of them by a lack of trees, although there are trees around them. Of course, that doesn’t apply above the treeline. You only make the decision to travel through them based on snow stability tests, avalanche bulletins and weather conditions. Because some in our group had not brought avalanche safety gear, we decided to proceed along a more southerly but higher ridgeline. 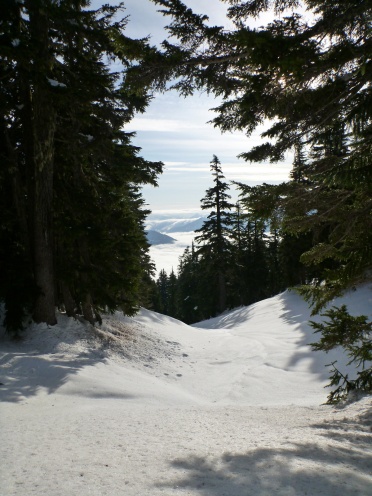 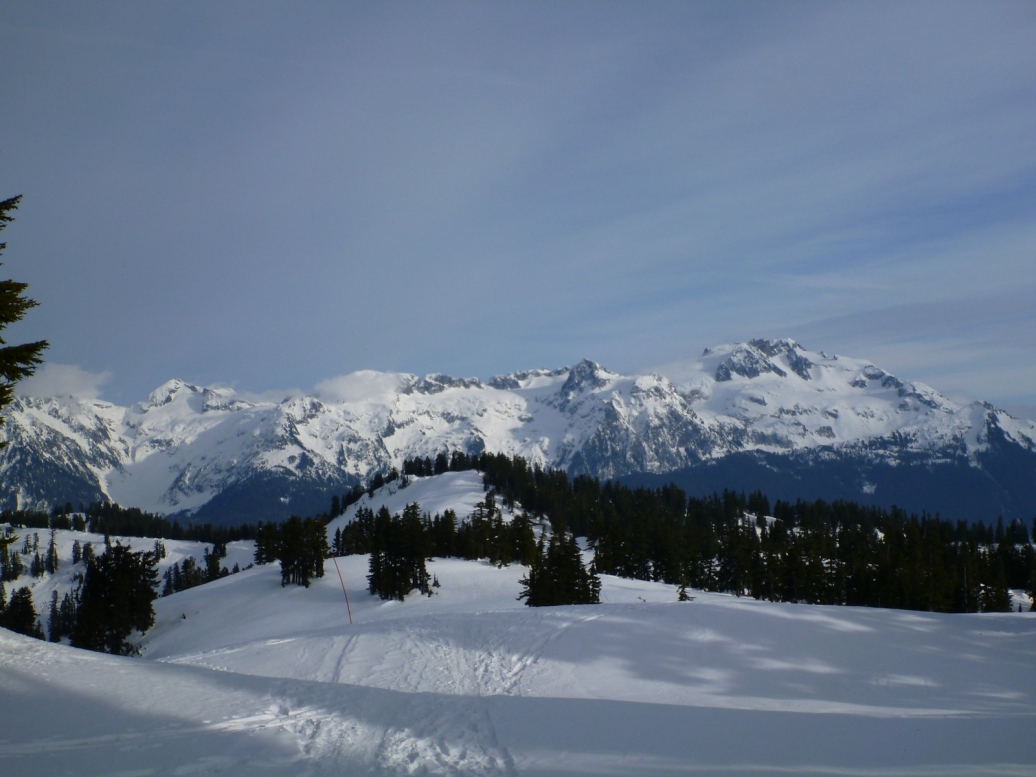 Now here’s where the debate starts and I think this deserves a full sized photo! Apparently everyone but me can see the huts in this view!

I cant see it but apparently it’s there!?

We trudged on and started to come across a novelty… flat sections, and even downhill! 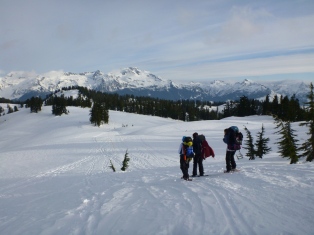 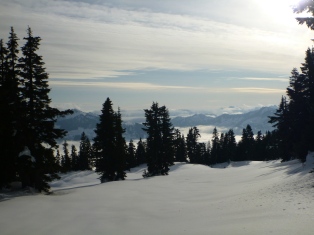 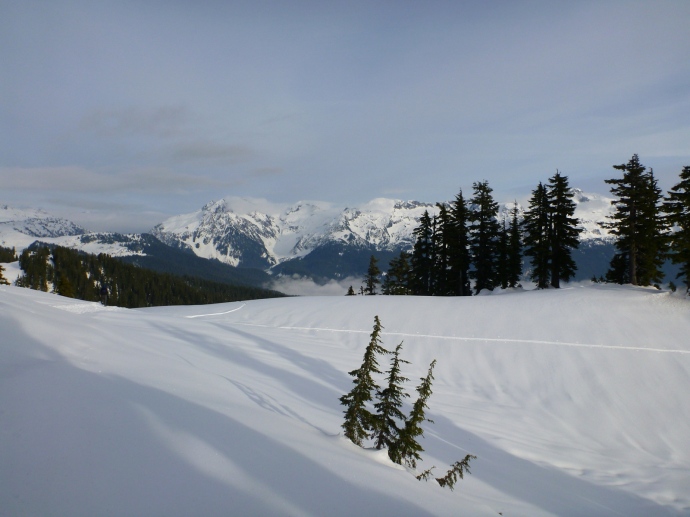 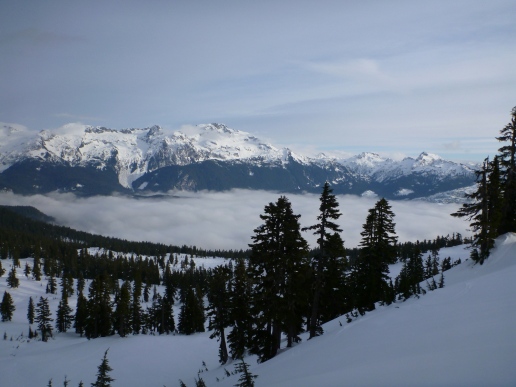 This has to be something that deserves a video. We ran into two guys who had built an ingenius way of getting an extra 40kg of gear up the mountains. The Pole Pack Hiker.

Wish I had one of those as the pack was digging into my shoulders. No matter, the hut was within 2km! 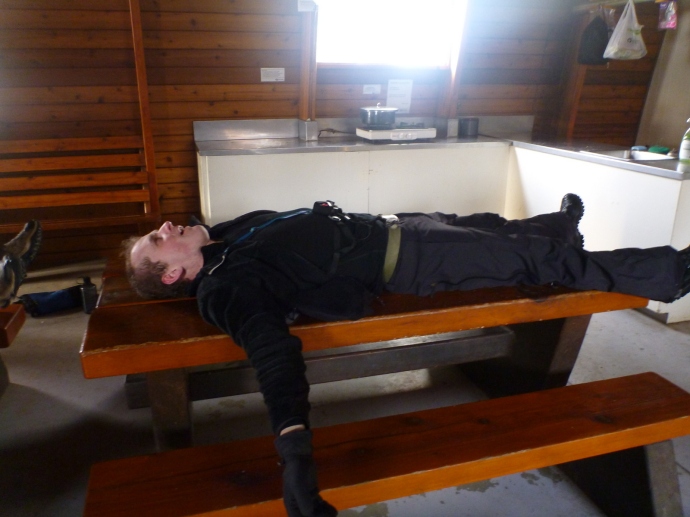 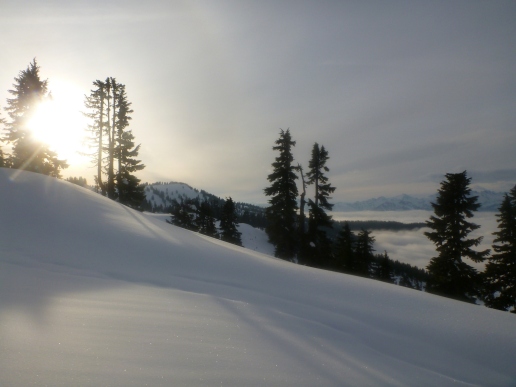 That night we feasted on the traditional Mountain House Buffalo Chicken Wraps and various freeze dried treats. Stephen kindly provided the Caesars! A rugby team or stag do or something also hiked their way up. They had brought pirate levels of boose! The rangers came along and asked them to keep it the hell down. When we all went to sleep (at a very adult 19:30, we had been up since 4 remember)… they were singing away. I think I actually said aloud in my tent “I wish these idiots would shut the fuck up!”

Sleeping in -12°C… well this is no where as easy as it sounds. When you climb into the sleeping bag, you will immediately be far to hot and have to unzip it. However, in the night, your metabolism slows right down, and you’re then going to start to get pretty cold. I woke up shivering a few times, but pulled a hat on, put my sleeping bag over my head and went to sleep.

Also, you’ll find your moisture rich breath will condense on the fabric of the tent. Then, when you move, it will snow back down on top of you! It did on me quite a few times.

The next day, this is what we woke up to! 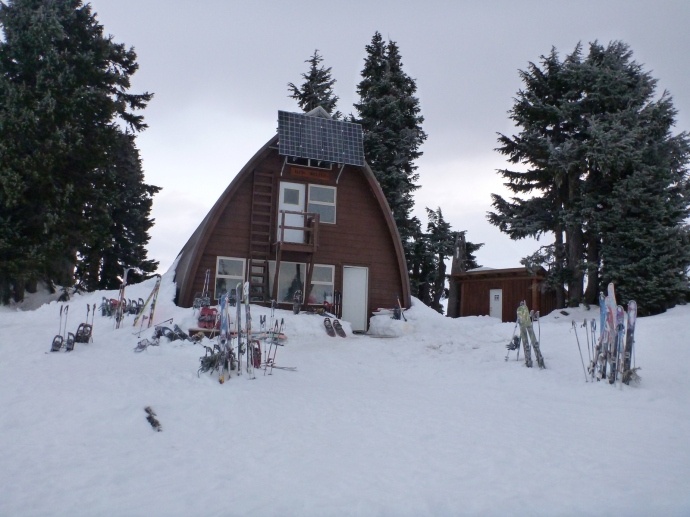 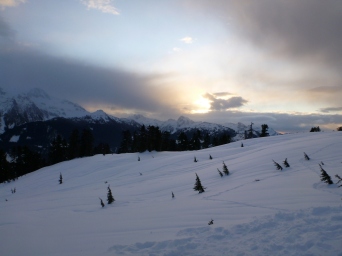 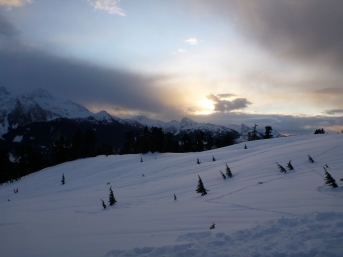 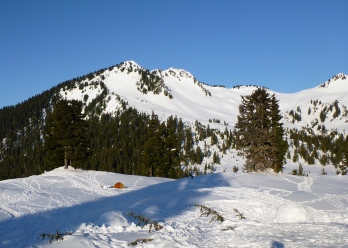 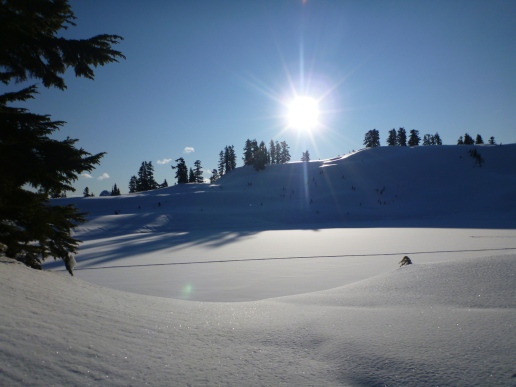 Today was going to be mostly downhill. Phew. It was also the best light of the day so I think I’m just going to post a load of photos! 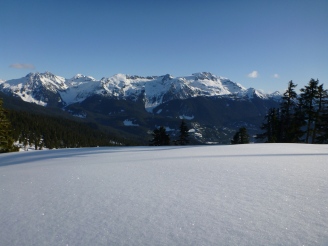 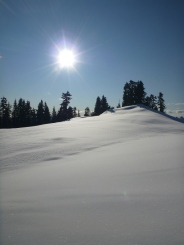 And here are a couple of Panoramas:

Back at the Red Heather hut, the Whiskey Jacks were back and out in force to steal whatever they could! They even nicked salami right off Stephen’s knee!

After that it was only a 90 minute walk back to the cars, which we were more than a bit relieved to see!

In conclusion, top marks for my snowshoes! 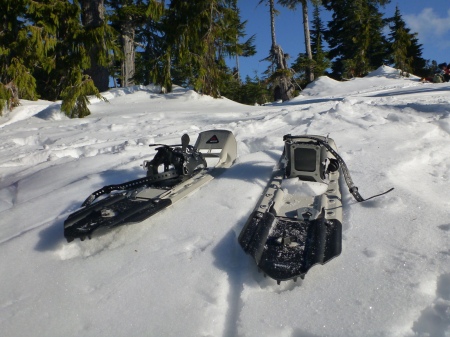 One thought on “Elfin Lakes Snowshoeing and Winter Camping”