As usual, I’m off into the outdoors for the weekend! This time we were off to Joffre Lakes Provincial Park. Plan was 2 nights up there, hike up on Friday evening (late in the day/in the dark for Harini, Hannah and myself), day hike on Saturday to somewhere and then hike down Sunday. Jesse (Hannah’s dog) would be coming with us for the first time, and yes, I was excited about canine company on the hike. Christina and Mark had to leave North Van after us, so they would hike up separately.

The way up included quite a lot of scrambling over boulder fields and the like. The route is supposed to be 5.5km, but it’s steep. If you’ve done the Chief or the Grind, you can do this, but you will be slower since you’ll have all the camping gear to haul up. On the way up we even saw a note from the trail crew, asking us to haul up some planks to build a bridge… I think that’s optional. Thanks of course to them for directing us to the camp site on the other side of the lake.

When we got there, we found the campsite was in a boulder/moraine field, so it’s got quite a lot of stone dust around… but they have tent sized patches ready set up, along with an outhouse, bear cache and you are right by the water! Just go find yourself a patch (the first night we had a more muddy one, but the second night we moved to a drier peninsula) and pitch up. You’re a long way from the outhouse at the camp site, so make sure you have your light available after sunset… and make sure you have brought Toilet Paper with you (it will not be waiting for you up there, everything has to be heli’ed in).

Dinner of Mountain House Buffalo Chicken Wraps as always, some wine from our funky lightweight Platypus wine preservers, some Baileys and Hot Chocolate and as we were about to hit bed, Christina and Mark finally show up! It turns out they had been somewhat more significantly delayed than first thought. So we all bed down,  Hannah had an unfortunate problem with small rodents running under her tent, but Jesse saw them off (we later found out that the drier camp sites don’t have this issue).

The next day we had a slow start (intentionally, we all wanted to relax). Did a massive photo session by the lake in the morning light! I had hauled up some pancakes and a frying pan, they were very well received by the group! Just make sure you have a way to melt your honey to make it more runny.

So we head off up a nearby valley for Tszil Mountain/Glacier and Mount Taylor. This involved more scrambling over boulders and this time the route isn’t as well marked, so bring along the Duffey Lake Map (which shows Joffre well). There is a toilet on the way just on the other side of the forest (kind of random as it’s a long way from the camp site etc, and you almost pass the one nearer to the site to get to this one). Bring some decent boots with you, glad I had mine to protect your ankles. Also, my REI Flash 18 Backpack is GREAT for taking up as a quick daypack!

Jesse found it OK on the way up, although he was especially pleased to see a lake about 3/4 of the way up. We took the chance to fill up on good clear water (remember your purification drops/tabs). The final quarter was snow and rocks to climb over. At the viewpoint we reached, we looped round the back of Mount Taylor and looked out over another valley. Great stop for a small rest while Christina & Mark head for the summit. Unfortunately, they didn’t make it down in time so I built them an arrow made of rocks and we headed off.

Jesse had a harder time on the way down, occasionally he would refuse to jump off a rock etc. We gave him a hand… and for my trouble, he scratched my nipple through my t-shirt! Yes it hurt. The snow was a bit more tricky going down as well.

As we were getting down, I filled up on water again at a stream we crossed (stream water tastes miles better than lake water). We got back and quickly set about dinner as we were all starving. More wine (including some French Rabbit in a TetraPak container) and story sharing (no this was not as childish as it seems, not this kind of stories). Jesse, exhausted from the day, came down to bark at Hannah, ordering her to go to bed immediately.

We did notice it was a bit windy that evening… the next morning I really noticed that the fly had blown off the tent! Still didn’t get up for a few minutes! We decided to load up on trail mi and hike down. It does take 2.5hrs to get down as the rocky sections mean careful footwork required, and you are covering quite a lot of horizontal distance.

Once we were back at the car, we wasted no time heading for Mile One Eating House for a frigging GREAT lunch!

Here are the photos (sorry these aren’t in separate galleries throughout the article, I didn’t have time to do so). 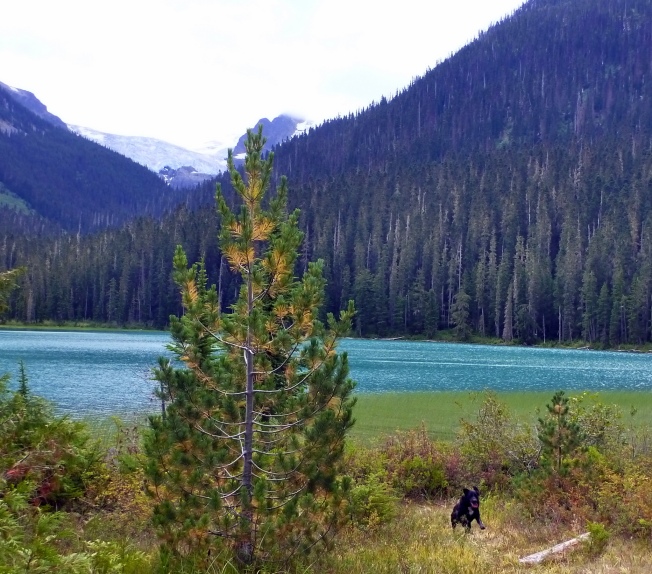 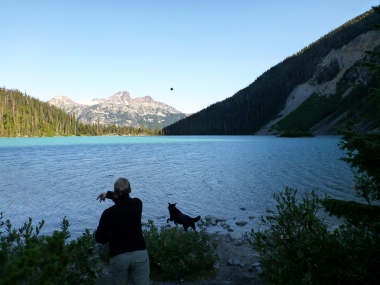 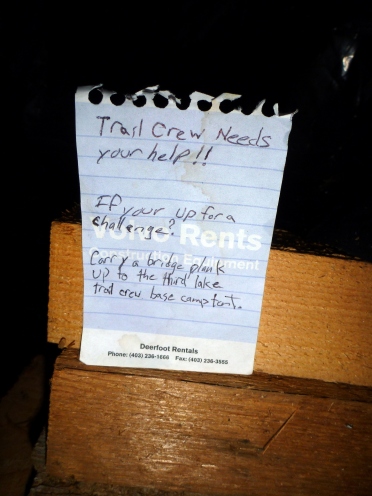 Sunrise over the glacier 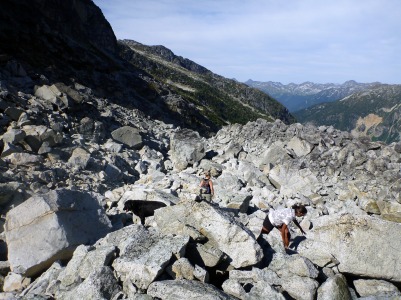 The scramble back down to the campsite from Tszil/Taylor

Jesse playing in the lake. He isn’t leaking polution 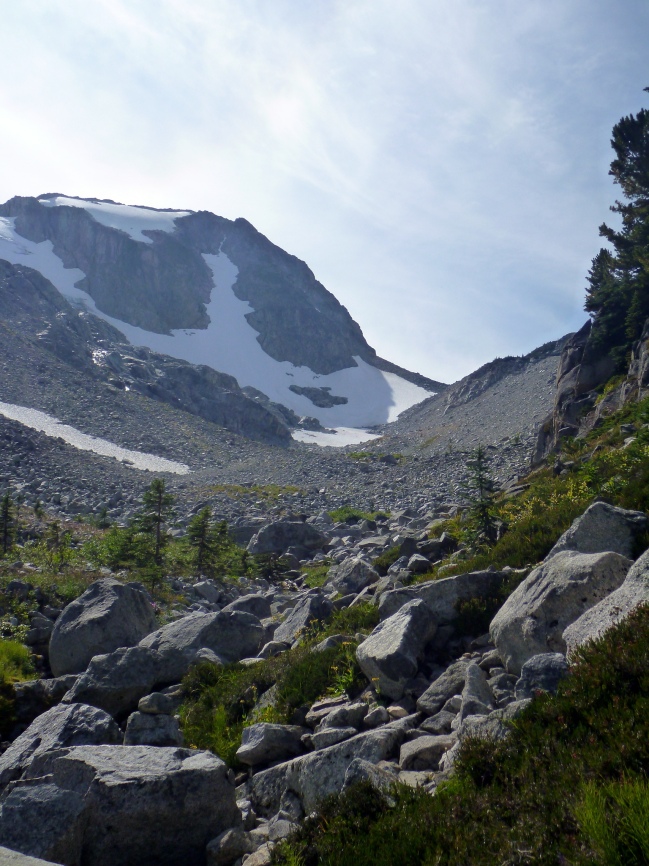 More of the valley, Tszil on the left (to the North I think) 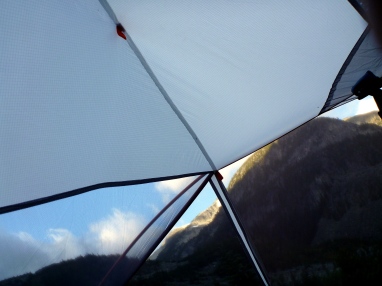 This is what I woke up to, the fly had blown off the tent! 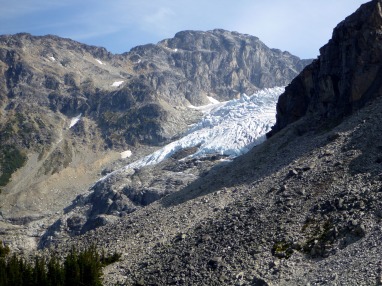 More Glacier still, as from the dayhike 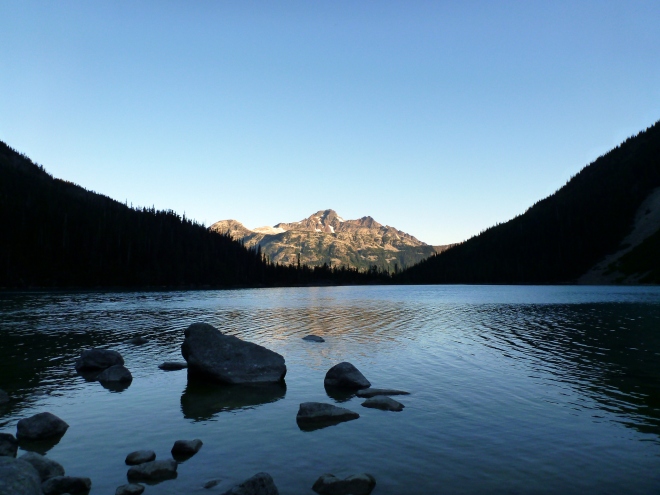 The glacier, as seen from the hike up to Tszil/Taylor

One of the creeks on the dayhike

Jesse wouldnt move off this rock, we had to help

The view from Taylor 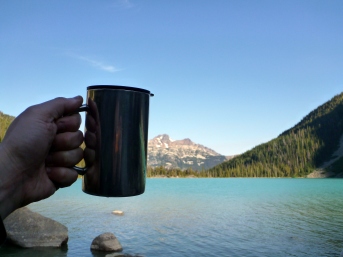 Love this simple Thermos mug I got at MEC! And what a great way to wake up 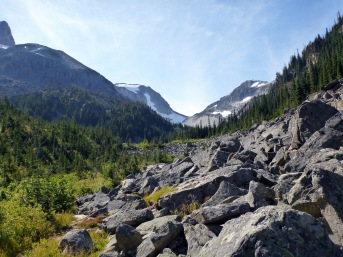 Lower Joffre Lake, where you start from. 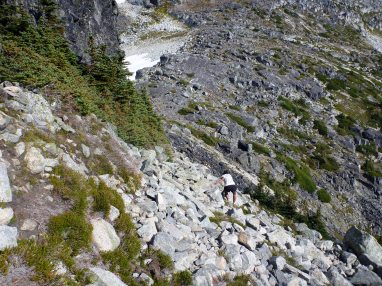 The hike back from the view point on Taylor, it’s easier than it looks.

Mount Mater and the Glacier 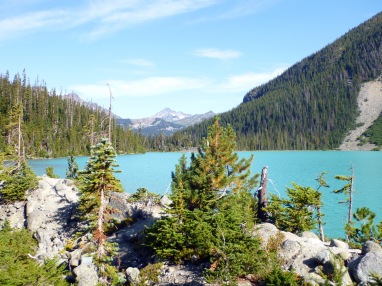 The way up, not the best marking, but you get the idea.

A great trip, well worth doing. I’ll update this post with some Photosynths from the area later.

Here are a few places you can read about Joffre Lakes:

One thought on “Joffre Lakes”