I’ve got a backlog of trip reports that I need to catch up on, this one is from December 2012

Winter had arrived and like all good winters, you get your snowshoes out and continue hiking, no stopping, not for snow, not for cold, yes for avalanche danger and not for newly diagnosed exercise induced asthma on my part, nor for the cold I had. The group decided we needed a weekend away at Red Heather Hut in Garibaldi Provincial Park.

Red Heather is unique because you cannot camp there in summer, bear activity is too high so (at the time of writing) it was not permitted by the Park Board. The hut too is only a warming hut, not a sleeping hut. Seeing as we usually like to sleep outside, that’s not a problem for us, so off we went.

The drive up was packed snow, I was appreciating my new Nokian WRG2 Tyres on the Impreza. A Ford Explorer up ahead was sliding all over, and when we got to the car park, we saw several pickups sliding into other parked cars. Squamish SAR were up there too, doing safety education and alerting us that the avalanche danger had increased (we all had beacons, probes and shovels). Some free whistles later, we were off.

The first part was a straight uphill slog as it always is, lots of switchbacks on the FSR. I must admit, I was feeling the chesty cold and the asthma. Salubutemol helped but I found myself somewhat grumpy frankly. My pack was cutting into my shoulders and I wished I was touring.

I’ll be honest, this was a slog up. The road isn’t that interesting, aside from the occasional spectacular view, but worth doing for the end result. Once you get out into the trees and snowy meadows, you feel more yourself.

We arrived at the warming hut and proceeded to warm up. Then it was tenting time. We flattened areas of snow ( which takes a lot longer than you think) and while I was doing it I noticed my foot had gotten stuck. I shook it loose and continued.

A few minutes later… where the hell is my snowshoe?

I had been wondering around with just one snowshoe the entire time. Out comes the avalanche probe and shovel, and me and Harini (thanks Harini!) searched for almost an hour for it! In the cold. It was buried just below the surface but damn hard to find.

That night we befriended a few people who gave us some rather good mulled wine and then played Hearts, taught to us by Mark, most of the evening. Slept heavy.

The weather was better for the hike down so the two on skis went off touring and the snowshoers. Better weather so a few more photos, we could see over Squamish. Soon we were in the cars (which miraculously hadn’t been hit by another sliding car while we were away).

Great trip! Gear worked like a champ apart from my (aging) backpack. 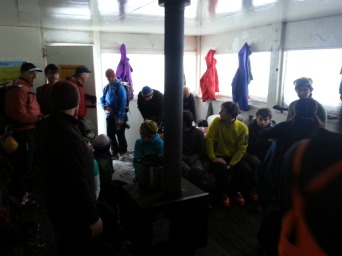 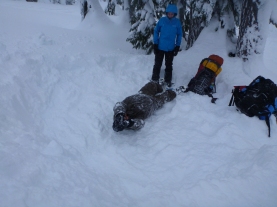 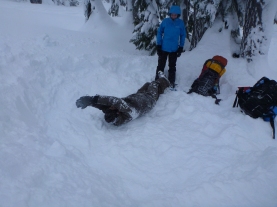 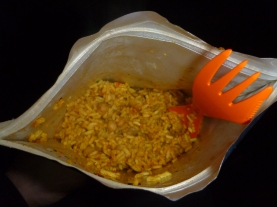 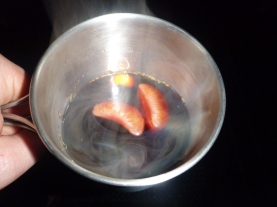 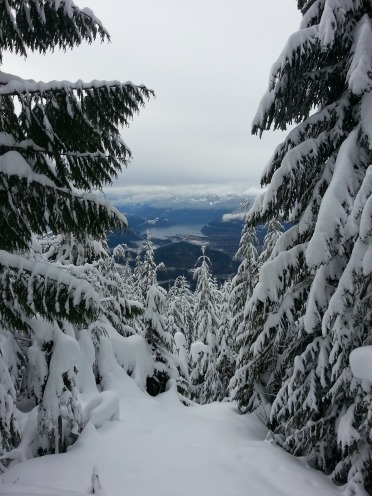 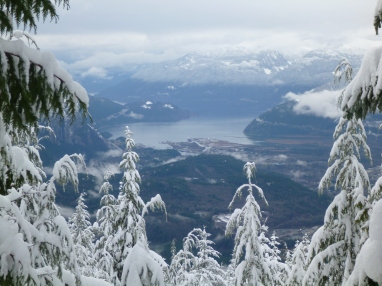