Here’s a more significant update for you all…

We had to go up the last day! The day before and today were as slushy as ever, only 3 lifts, the gondy and the T-bar were open (yawn). So, we spent quite a while in the park. The whole place was nearly deserted appart from large queues at the top of the jump. We all tried the pipe and had a great time as it turned out. Jump turns are essential to keep any speed in there.

Anyway, biggest news of the day I suppose would be that Shane-O (left) fell down a tree well. I raced in there after him to find he had hurt his backside and leg, however, he had a spine protector on which kept his back safe thank god. He was limping for days and it’s still not right as I write this.

Got a single room

Got a single room, as the title implies. I will say more about this at some point when I’m bored.

Hayley, Sushi Queen (shown eating cake), had us all go to Sushi Village for her leaving meal. Jugs of Sake Margarita were $10! Brain Freeze was free with it, however. Somehow, they had also found a way to make Sushi the most filling thing on earth! How, I do not know! Could have been dodgey scollops I suppose. Either way, by the time I got to Bills I was feeling well rough. Stayed until the prize draw that I didn’t win and wasted money on non-effective alcohol thanks to my full stomach.

England v. Paraguay eclipsed both Janet’s Birthday and Alex’s departure back home. Woke up at 5:57 AM for the 6:00 AM kickoff, never drop your phone and forget to reset the clock folks. Drinking started as soon as the first England goal was scored, and was continued throughout the day! Hell, everyone was off and there were plenty of reasons to celebrate.

After the match and the texts we headed to McDonalds for breakfast. This would be like my 2nd McDonalds since I’ve been in Canada, and the first one made me feel bleeding terrible all day. This one however, was miles better. 2 Hashbrowns, 2 Breakfast Burritos (Egg, Sausage, Peppers and Cheese in a wrap), and it actually filled me up nicely (not a sugar rush).

Anyway, came back home, called Dad, David and Ed and then headed out into the sun again. Frizbee, Volleyball (harder than it looks), Round the World Footie all played. After the beer started running out up here we decided to head to Rainbow Park (lakeside beach). Filled up an esky, went to the bottle shop to get more booze and then to Subway, who let us load up on as much ice as we wanted with purchase of Daily Special Sandwich.

The signs said 3km to Rainbow Park… easy! However, once you think you’ve walked that 3km, the signs still say 1.8km to go! Even for me, and you know how much I walk. Finally got there and it was totally worth it. Pontoons to swim out to, volleyball nets, canoes. Had a few good games of Frizbee Volleyball and chilled out for ages, slowly getting more drunk as I worked through my 6 pack + extra bottle of mine I found in the esky.

Got back home at 8ish (just got the last of the light), had a bit of tea and headed to Big Mikes with the final beers for the end of day drinking game of sticker on heads. Camilla Parker Bowls is hard to guess.

The Hangover was a cold

As it sounds. Went to work feeling terrible for the next 2 days. Liam had caught it as well. Slept in on Monday thanks to Nyquill being very effective at keeping you asleep.

I’ll write some more later folks… now I have to go load up MC’s iPod.

I’m too tired to write a real post, so I’ll just say that I’m watching Mantracker on OLN.

Its a pretty good show, essentially about 2 folks running around the bush with a trained outback tracker searching for them. Really quite intresting what they get up to, realistic. Unrealistic in the sence that the tracker would not see 2 Army fellas hiding in a bush when a cameraman is standing and pointing a camera at them. 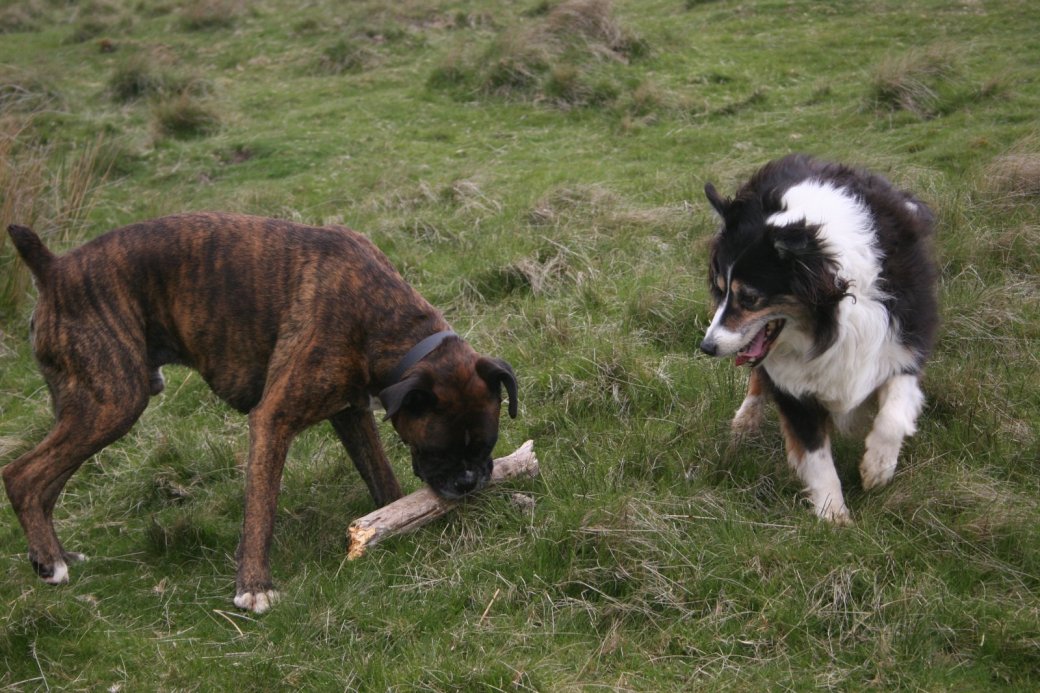 Sort of sums them up really

Tosca (the Collie) is looking a fair bit older than when I last saw her. Billy appears to be his usual, lunatic, self.

Still, good to see them looking well. Thanks to George for taking them!