OK folks, this small section isn’t going up on the blog as it was mostly just time with Tracey and a bit of shopping. It’s been great don’t get me wrong but it’s not blog material by any means and I don’t really like to put too personal stuff up here.

However, this is not to say you won’t get a few photos

The rest will be arty shots!

This took ages to get the shot right

Then on Wednesday it was time to get up and head to the airport.

One thing I will say about Aus and New Zealand is that there is no doubting the people down there. I’ve stayed with friends most of the way and had loads of offers to stay with connected friends/relatives/people I might like. I was blown away! What a great place! I will be back!

While I was out on Stockton Beach in a 4×4 a few weeks ago I shot a video. A lot of editing later and we have this! The best bits start about 2 minutes in I would say.

EDIT: Ok, it’s been pointed out that it’s not a Toyota Land Cruiser after all, it is in fact a Nissan Patrol.

Now I had no idea I was going to do this when I got into Peter’s (Tracey’s Dad) formidable Toyota Landcruiser! We headed for Stockton Beach with the main goal of getting to Tin City! 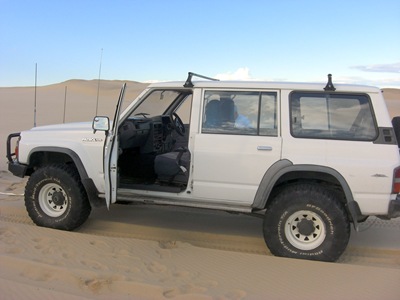 This was the tool of choice, equipped with offroad tyres, onboard compressor, dual batteries, LPG, CBs, it’s better known as the Beast!

Arty shot (this one,I will admit, had a bit of help from Picasa)

The rear left tyre most likely had dirt in between the rim and the tyre, so we had to stop and inflate it quite frequently.

This was probably the best car shot! 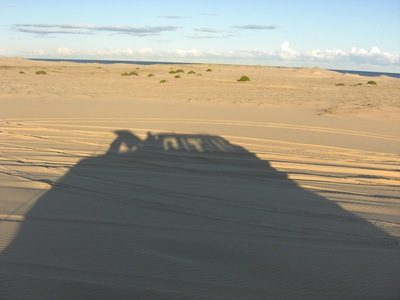 It was later in the day

Tin City is a collection of shacks built out of random metal sheets, just out in the open on the beach. It became quite a sight for anyone willing to make the trip. In fact so popular that when the Council tried to demolish the buildings the State Government enacted a Heritage Order on the buildings protecting them! In Peter’s words, the occupants must now be sick to death of people coming to look at them! But it’s like a film set out here! I took a pano of it all!

Then we headed back along the coast

My camera is on it’s last legs so I don’t mind sticking it out the window!

Can’t remember this wreck’s name but it was pretty impressive, the fishermen loved it!

This was a seriously good day out!

And there is a little more to come…

EDIT a few weeks later: And here it is