Back in June 2014, I did another trip to Joffre Lakes Provincial Park. The first trip was great fun and some of my best photos, and  I hadn’t been for a few years so why not.

For those of you looking for details and maps, here they are:

Now for the updates. Since I last went, the trail work has mostly been completed. The lower boulder hopping is now a smooth path. There is still a steep ascent through the trees requiring careful footwork. I had a broken radius and was in a cast at the time so gripping was tricky. As you get just past Middle Lake, you might find fallen trees that you need to duck under. The upper section has been rerouted East (to your left if ascending) and now there is a stairway and bridge as opposed to another boulder field. The approach to the campsite is still along a rocky shoreline and the outhouse door was broken when we were there.

Camp set up (quieter in June so no issues finding a spot) and dinner eaten. Jesse (dog who was with us) unearthed “human leavings” under a stone right by the campsite. If you’re thinking of doing this, please don’t. Walk to the outhouse like a civilized human-being.

This time, instead of doing Tzsil (snow was still too low), we headed for a lookout near the Glacier (see the map above). This was steep and you had to be careful of your footing and of falling rocks. However, seeing all three lakes at once was spectacular.

Now, onto food. We had decided to hike up a light frying pan, cutting board, spatula, tongs and the following:

That made pancakes and scrambled eggs for breakfasts!

That made an enormous amount of stirfry and soup (a very excellent soup Louis I must say). We were absolutely full and kind of happy not to eat dehydrated for a change.

I’ll be doing another, beginner focused, hike up there soon! 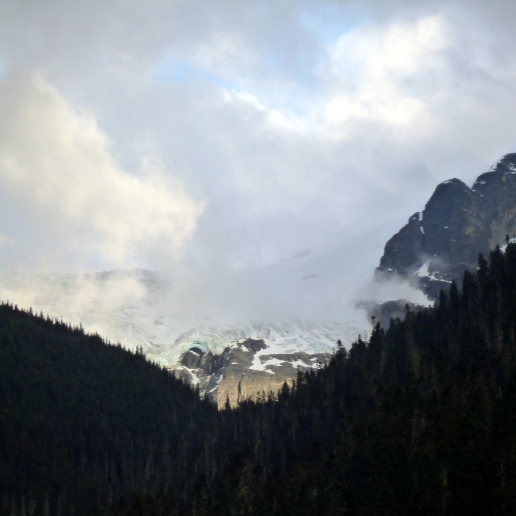 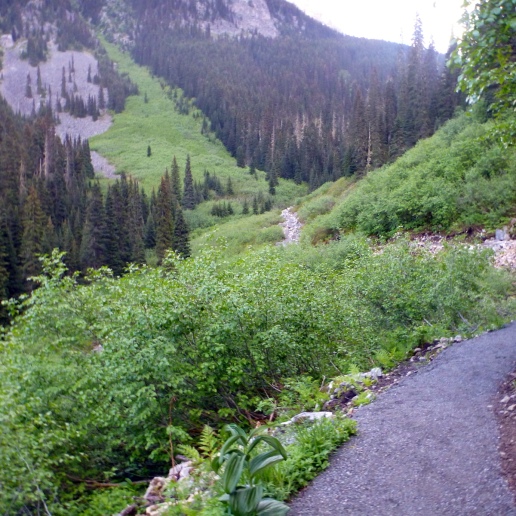 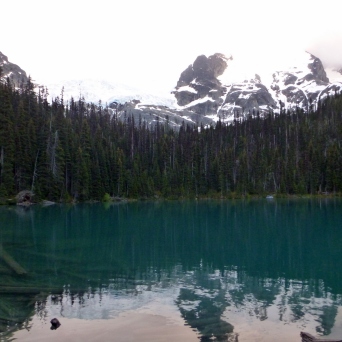 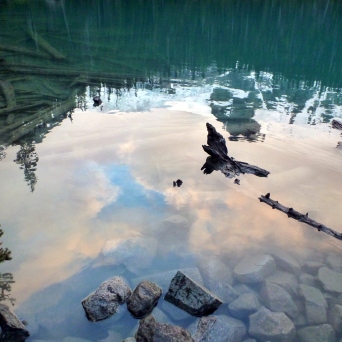 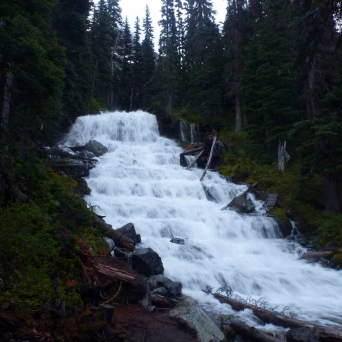 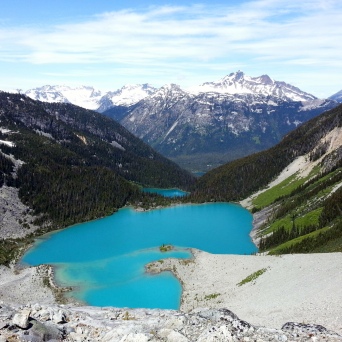 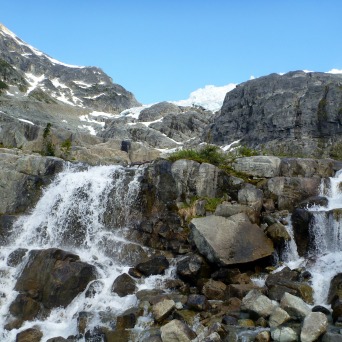 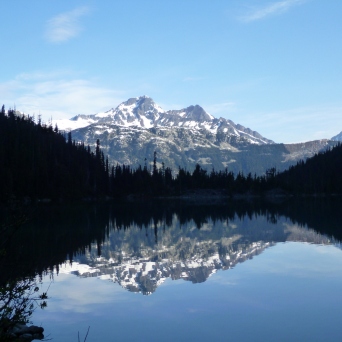 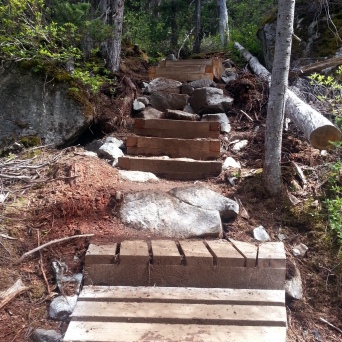 Some of the old posts from my first year in Whistler had broken links to photos etc. I decided that this simply would not do.

I’ve updated the posts to include (some) of the photos that were missing and remove the links to the old galleries:

It seems that I’ve lost the photos from Big Mike’s 30th Birthday or these ones from a night on the lash?

Took quite a while to edit them in but I think it was worth it. Enjoy!

Hey folks, know I haven’t updated in a while. There’s not been a lot that’s really worth posting since I left Whistler, plus the motivation to do it has died a bit. It’s easier to stay in contact. Perhaps I’ll start writing this again but really it’s run of the mill “went drinking, went to work” at the moment.

But, there is a good reason for posting this particular entry. Last weekend, Shane, Caroline, MC, Alex, Elaine, Helen, Andy, Janet, Alan, Hayley and Me all met up in London! My god it was good to get together!

We started organising the meetup in December, so that the Scottish/Irish Girls/Girl had time to book flights from Glasgow/Dublin/Edinbrough and Helen could plan to get here by road, everyone else was in London. (FYI, I’ve moved down here from Leeds to work at a software firm doing Siebel Support). After quite a bit of sticking about the date we settled on it, and last weekend was it.

Met in Weatherspoons in Leicester Square on Friday evening for loads of cheap (relatively cheap for London at least) drinks and to catch up. Worked well since they don’t play music in that place so you can hear each other. Many many rounds were consumed, and stories shared. Brief rundown of what people are doing now:

So… we had to hit the Jager! Over here its cheapest to buy 2 shots of Jager + A full can of Redbull (which they usually try and mix, known as a JagerBull, we insist they DO NOT). Slammed those quick and tongues started to loosen. I was defiantly making “less than shy comments” (sorry MC).

Barrelled out of Weatherspoons, got some munchies in McDonalds, headed to a bar called Fuel (or something?) in Covent Garden. For those of us who are not 6 foot 3 inches (which as you may remember is every bloke there) this club was very roomy, vertically, however muggins here, Alan and Alex all got sore necks. Hayley also invented some weird thing where she puts her cardigan on your arms, backwards, and then dances infront of you so it looks like your arms are hers… very creative but could go so wrong.

Headed out, took a group photo. Hopped in expensive taxis and I got back at 3am.

Next day woke up late, left house later still, met MC and Cas in O’Niells near Kings Cross to watch Celtic vs Aberdeen (which was quite good, especially when a Celtic player ran full on into a copper). Ate the remains of their full breakies (I wasn’t that hungry for some reason) and gradually the group arrived, all drinking the hair of the dog that had bitten them.

Decided to go and hit up Camden market. That place is fantastic! Loads of weird, creative and hard to find stuff there. If I’m ever caught short for a gift that’s where I’m going. Also if I’m ever in the mood to go raving and want some neon orange spikey trousers, I will also go there. Anyway, after some Earl Grey and antiques I headed back to drop the white hoodie back home and get into some gear to meet up in Hammersmith for the evening drinks.

Met at some bar somewhere in Hammersmith, fortunately it was one of the chain pubs that are quite prevalent down here, so drinks weren’t much. Had a Chicken Club Sarnie for tea! Haven’t had one since Whistler and frankly… it was a let down compared to Merlins. Still, good live music I’ve got to admit, even if they couldn’t get the levels right.

Moved onto Lloydd’s where we were searched at the door and even had IN BETWEEN THE NOTES IN OUR WALLETS CHECKED! They checked that but failed to find the blister packet of flu tablets I had in the top pocket of my jacket (to be fair, I forgot they were there as well).

At this point more drinks were consumed, Caroline and MC arrived having met Elaine earlier, who couldn’t make it. Helen couldn’t either as she had a course the next day and needed some rest. This is where the JagerBombs started… video this time:

Slammed 4 of those then headed to some bar in Fulham where we queued for ages to spent £10 (that’s a lot) to get into some club where you couldn’t move whatsoever and drinks were expensive (Janet and Andy, realising what this would be like, headed home beforehand). A good night was still had by all!

On the way out we were all stood about when suddenly I see Shane lurch forward, and 3 or 4 blokes behind him, one wielding a chair, kick off. Note to Alan: Do not stand in the middle of that and then say “They wouldn’t have started on me” when I pull you back from it. Note to MC: You seemed well defended on the other side of the croud, and Caroline was trumpeting how good you were in a fight.

Said our goodbyes at that point, we knew that Sunday was a complete writeoff. Infact I went and got an £11 desk at Ikea on Sunday to stop myself spending any more money. Then Alan and Hayley and Me went to see Hot Fuzz, which is hilarious!

To all that we’re there: it was fantastic seeing you all! Will have to organise another, T in the Park or Leeds Festival anyone?

To all that couldn’t make it: you were missed and reminisced about. Let us know if your in Blighty and we’ll meet up.

Just from the camera phone…

We all still had local's stickers from Whistler!

Had to be done!

The gang! (from Alan's camera)